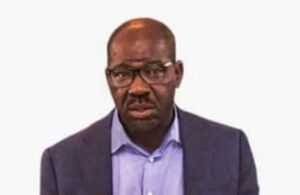 Governor Godwin Obaseki of Edo state has concluded plans to plunge the state into another unnecessary crushing debt amounting to a whooping sum of N25 Billion with his Afrinvest Company as broker, a chieftain of the All Progressives Congress in the state, Mr John Mayaki has revealed.

The bond, according to Mayaki is sponsored by Edo state government and guaranteed by an irrevocable Standing Payment Order (ISPO) on the state’s internally generated revenue.

He said the ISPO was issued by the Edo state ministry of finance with proceeds from the ISPO remitted monthly into a Sinking Fund Account established and managed by appointed Bond Trustees duly registered with the Securities and Exchange Commission (SEC), for the purpose of meeting all obligations in accordance with the Trust Deed.

Mayaki, while explaining the offer identified the issuer of the bond as River Jamieson SPV Limited with Edo state government as guarantor. He said the bond was described as ‘Series 1 fixed rate senior guaranteed bonds’, and has a programme size of N25, 000,000,000.00 and with a tenor of five years at 8% to 9%”.

The APC chieftain further explained that the bond’s ‘book build’, which opened on December 7, 2020, closes December 11, 2020 with funding date as December 14, 2020. Mayaki said, “an electronic document sent to the Group Managing Director of Obaseki’s Afrinvest, Mr Ike Chioke claimed that the purpose of the bond was ‘to finance identified infrastructure projects’ in Edo state”.

Addressing journalists, Mayaki regretted saying, “Our debt isn’t going anywhere under Governor Godwin Obaseki, rather, it’s ballooning”. He said the state was no longer viable for local and foreign loans adding, “the grim reality is that this debt burden is without legislative framework and approval”.

“This is an unnecessary crushing debt the governor would be plunging the state”, Mayaki sounded the alarm noting that the volume of debt was already high for Edo state.

“I want to urge Edo people to call the governor to backtrack. We must stop Obaseki and his government from this unpleasant financial burden with grievous consequences on the citizens – I say this because of the hazards. If we must be protected from the pains of this proposed N25 billion bond, we all must rise to the occasion.

“Why does Governor Obaseki think he can always damn the taxpayers? Where’s the legislative framework? Why the secrecy? Why is the Governor always opaque in the administration of the state government financing? Why piling more debts on the taxpayers that they may not be able to payback? Why amassing debts for generations yet unborn?

“The startling reality is that the future of Edo state isn’t certain with Governor Godwin Obaseki financial recklessness. I want to call on the governor to therefore come clean on this bond and tell the struggling Edo taxpayers how they can meet his debt repayment plans under the pressure of a virus-induced economic recession in the country – otherwise, the good people of Edo state do not see any reason for this debt trap especially in times of heightened economic uncertainties and fears”.

While expressing worries over the state’s debt sustainability, Mayaki said, “Rather than front-loading debts to further increase the already over-burdened Edo people, I call on the governor to cut down on government over-head and recurrent expenditures”.