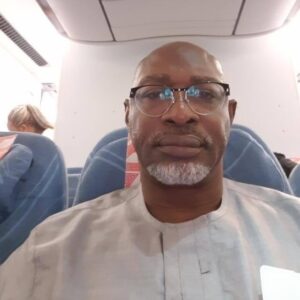 One of the remnants planted by Governor Godwin Obaseki in the Edo state chapter of the All Progressives Congress (APC), Mr. Anselm Ojezua says the National Chairman of the APC and Executive Governor of Yobe State, Mai Mala Buni and members of his Caretaker and Extra Ordinary Congress Committee have failed in delivering on their mandate.

The known ally and protégé of the PDP Governor tongue-lashed the national leadership of the APC while accusing them of “negligence”. He said, “They are one year behind in trying to resolve the issues in the party, as far as I am concerned”.

While addressing journalists in Benin City on the dissolution of the party structures across the country, Ojezua said the Yobe state governor and his committee got six months to achieve some set goals in rebuilding the party but failed. He’s however not optimistic they would achieve anything tangible with the extra six months extension of their assignment.

According to a frazzled Ojezua, “They were given 6 months to carry out an assignment, what have they achieved in 6 months”, he queried. Continuing, he said, “Their achievements in the first 6 months will give me the impression that they will do more in 6 months”.

A pessimist Ojezua says there’s no future for the APC. While expressing fears for the future of the party, the disgruntled suspended state chairman said; “the future looks very bleak as a result of negligence because in Edo for instance, untold damage has been done to this party in this state”.

Ojezua’s dissatisfaction is sequel to an alleged “trashed” letter he sent to the national leadership of the party, it was learnt. While corroborating rumours that his letter was trashed, he said, “we wrote to the national caretaker committee, they did not even acknowledge receipt of that letter how much more to address the issues that were raised and that leaves to much to be desired”.

He may have been contemplating and halting between some choices – to either remain in the APC or join his ally, Governor Godwin Obaseki who decamped to the Peoples Democratic Party (PDP) in the eve of the September 19thgovernorship election in Edo state. In his words, “Politics is always about choices”, he said.

Shedding more light on the possibility of defection to the PDP, Ojezua said, “In Edo state, we would meet very shortly and we will take a position because like I told you, politics is about choices and the choices belong to the individuals that make up the membership of any political party”.

The swearing in of the caretaker committee members held at the APC National Secretariat in Abuja – it was greeted with renewed hopes for the party, it was gathered. According to Col. David Imuse, “this marks the beginning of a new chapter in our great party”.

Col. Imuse who pledged his loyalty to the leadership of the party said, “I want to on behalf of myself and members of the APC family in Edo state congratulate the National Chairman of our party and the Executive Governor of Yobe State, Mai Mala Buni and members of his Caretaker and Extra Ordinary Congress Committee, on the success achieved so far in the arduous task of rebuilding and repositioning our ruling party.

“These achievements are not without the support and leadership of our visionary President Muhammadu Buhari, GCFR whose sincerity of purpose, principles of internal democracy as well as unblemished integrity has remained untainted”, Imuse said.