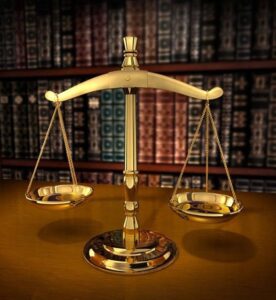 The Nigerian State stands on a tripod of the Executive, Legislature and the Judiciary which powers of each Organ of Government is properly delineated in “Sections 4,5 and 6 of the Constitution of the Federal Republic of Nigeria 1999 (As Amended )”

The Governors control the purse and the sword in Nigeria. In a Country like ours where the Governors act as Emperors running the State as personal empires the Judiciary is the only Organ that moderates the Excesses of the Governors.

Aware of these facts indicated above, all the 36 States Governors in Nigeria have desecrated the same Constitution they swore to protect, which in saner clime is an impeachable offence.

Section 121 (3) of the Constitution of the Federal Republic of Nigeria, 1999 (As Amended) is clear and unambiguous to the effect that “All Monies standing to the credit of the Judiciary shall be paid directly to the Heads of Court”

Why is it difficult for Governors to obey this Section of the Constitution, but obey others that favour them, the reasons are not far fetched.

Many of these Governors have skeletons in their cupboards and allowing the Judiciary to be financially independent is like handing over to the hang man a noose and a hood to execute you. The Governors know that once the Judiciary is Independent, the blatant impunity with which they run the States in this era of the preponderance of Freedom of Information will be over. I wish to tell the Government and their collaborators, some of whom are very senior Lawyers that the Independence of the Judiciary is nigh and it shall happen quicker than they think.

The Bar at the National and Local Levels need to do something to protect the Judges from the perfidious invasion of the Judiciary by the Governors which is borne out of selfishness and in some cases outright callousness.

But the Judges have to do more to protect themselves. It is time for the Setting up of an Association of Nigerian Judges as a Pressure Group to Wade off the improper annexation of the Judiciary by the Governors .The Other day, a Governor sent vehicles to the Judiciary in a State in Nigeria and he attached the names of Judges to each of the vehicles. What is the Business of a Governor to purchase vehicles for the same Judges you have cases in their Courts, some of which are even election related Matters?

The Executive choose their SSG, Chief of Staff and Commissioners, the Legislature choose their Speaker and other Principal Officers, why Should the Governors be choosing our Judges?

When I was younger, you were called upon to serve in the Judiciary, judging from your tract records in Practice or in the Lower Bench. Now, the lobbying to be a Judge with a Governor of the State makes you ask the Question whether you are appointing a Judge for the Judiciary or a Judge for the Governor. How can a Judge that is so political exposed in his Appointment process do justice in this highly political charged environment called Nigeria.

Some of our Bar Leaders are quiet to all these shenanigans, which suggest that “they are either cowards or accomplices”

We, as Lawyers have no other profession. We can not allow a few people to control the Judiciary the way a puppeteer controls a Puppet. Budgeting is Governance, he who feeds you, control you and he who pays the Piper controls the tune.

We have no reason to complain about obnoxious judgments when we are quiet in the face of obnoxious appointment processes for Judges. You can not sow cocoyam and reap yam.

The Legal Profession is modeled to protect weak and moderate the strong. The Judiciary should also be quick to assert itself when cases challenging the illegalities of the Governors on any issue is brought before it. The Judiciary most times panders to the whims and caprices of these Governors, which further emboldens them to do more wrong,with out any fear of reprimand. We have had a few courageous Judges, but they have also paid the price when their retirement benefits are wickedly with held by the Governors who now run the States as thin gods, forgetting they leave power one day!

Justice Adolphous Karibe-Whyte (Justice of the Supreme Court, as he then was) Stated in the case of AG Federation v Guardian Newspapers LTD (1999) 9 NWLR Part 618 @ 87, if a may paraphrase, “that in the face of tyranny the Judiciary must rise up against the Excesses of the Executive else the the State will be subsumed to the dictatorship of one man”

Chief Gani Fawehinmin SAN of blessed memory captured aptly the place of Bar and Bench in the Society when he unassailably stated that; “The Legal Profession ought to be and must strive to remain the dependable bastion of hope, help and succour for the repressed, the oppressed and the suppressed in our Society”