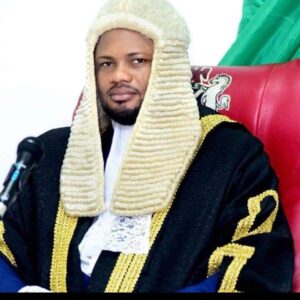 A group under the aegis of Edo Coalition for Justice, on Wednesday denied the allegation of murder leveled against the Speaker of the Edo State House of Assembly (EDHA), Mr Marcus Onobun.

Some persons in Obagie-Uwafiokun community of Ovia North East Local Government Area of Edo had on Tuesday accused the Speaker of sponsoring the killing of their son, Mr Osaheni Osadolor, over a parcel of land.

Led by one John Eweka, the bereaved Obagie-Uwafiokun community persons, who protested to Government House in Benin, claimed that the deceased was murdered at his mechanic workshop on March 13 on the alleged orders of the Speaker.

But in a statement on Wednesday which was made available to newsmen, the Coalition for Justice, said the allegation was a mere fabrication of political detractors and some persons who are out to rip where they did not sow.

The group’s spokesman, Mr Andrew Uwe, regretted that rather than seek a legitimate job, the protesters were seeking to malign the name of a man who is working hard to see to the development of the state.

Uwe explained that the crime being ascribed to the Speaker was an incident that had occurred days before he (Speaker) visited the community.

He noted that the Ogida Divisional Police Station had already concluded preliminary investigation on the alleged murder matter and transmitted the report to the state Police Command before the visit of the Speaker to the community.

The group further explained that the Speaker had on Sunday, March 14, visited his land to monitor the development process when a young man, who was identified to be the brother of the deceased came to accost him that he was the owner of the land.

The statement read in part, “As a matter of fact, Mr Speaker had gone to the community to start work on his property he had bought in 2016 when a young man met him to tell him that the said property was not his or belong to the community he claimed to have bought it from.

“The Speaker got the plot of land in Iguogboe community around Upper Siluko from one Aghedo, a retired Chief Superintendent of Police, who is the Edionwe of the community.

“The Odionwere denied knowing the man and it was after that that the Speaker went with the man to make a written report and submitted it to the Divisional Police Officer. He told the DPO to investigate the matter after which he left the police station.

“On Monday, the DPO called to say the Onogie of Obagie and some chiefs were the station to bail the young man that was being investigated. He invited the Speaker to come.

“When he (the Speaker) got to the police station, he was taken aback when he saw women and other youths protesting that their brother had been killed, but when the Speaker entered the station, he sighted the young man he brought to the station standing in front and wondered what they meant by killing someone.

“He went to the DPO’s office with the Onogie of Obagie and other chiefs and the DPO asked if they had met the Speaker before and if they had an issue with him, they said no.

“The Speaker had to tell the DPO what the people outside were saying about the death of someone.

“It was at that point that the DPO said an incident happened some days earlier where a young man died and that the station had concluded its preliminary investigative report on the matter and that the incident did not happen anywhere close to the land that was being cleared.

“He said he had even given the preliminary report on that matter to the state Police headquarters in Benin City.

“At that point, the Onogie of Obagie said he agreed with what the DPO said, but that the agitation was that the man being detained over the land matter is a brother to the deceased. He said their anger was the detainment of the man who lost his brother a few days before.

“So, the DPO now instructed the Onogie of Obagie and his chiefs to go outside to correct the wrong impression, which they did.

“They went and came back to apologise to the Speaker on behalf of the Onogie and the community over the embarrassment they tried to cause. They did this in front of the DPO.

“At that point, the Speaker made peace with the chiefs and those around and left the station, at that point the people who were outside were already sober after realising that what they did was wrong.

“Somehow, on Tuesday, we started seeing another narrative being dished to the public.”