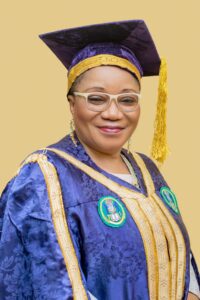 Member representing Ovia Federal Constituency, in the Federal House of Representatives, Hon Dennis Idahosa has lauded Prof. Lilian Salami, Vice-Chancellor, University of Benin for her innovation in academics and infrastructural development in the ivory tower.

The lawmaker gave the commendation in a statement by his media aide, Osaro Aghedo, on her first anniversary in office as UNIBEN Chief Executive.

Idahosa also lauded Salami’s leadership role in the area of innovation and her consistency to ensuring that the University retains its leading position as an institutionof first choice.

“Professor Lilian Salami has been a good Ambassador of the University of Benin with her exemplary leadership style, innovations and academic excellence”

“I urge her to keep up the good job, remain focused, work within the framework of the laws establishing the university so she can continue to be seen as a model of transparency, accountability, and openness in the university administration,” he said.

Idahosa advised her to be conscious of the fact that Nigerians are expecting much from her being in charge of one of the best universities in Africa and globally.

BREAKING: Helicopter with 16 people on board crashes