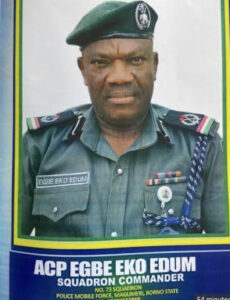 The Public Relations Officer, Cross River Command, DSP Irene Ugbo, who confirmed the incident to newsmen said the deceased came into the state to see his family.

Ugbo said Edum was killed with an axe by the gunmen on the Murtala Mohammed Highway.

She disclosed that investigation is ongoing to bring the perpetrators of the crime to book.

“It’s unfortunate that he was killed in that manner.

“He only came to be with his family but was killed by yet to be identified gunmen.

“Investigations are currently going on and the force will ensure that those behind the crime will be made to face the law,” she said.

It was reported that the deceased was the Commander of the Police Mobile Force (PMF) Squadron 73 in Magumeri, Borno