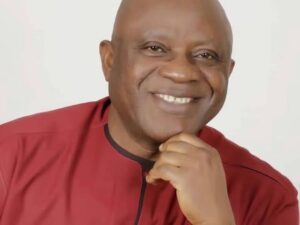 The honourable member representing Etsako Federal constituency at the House of Representatives, Hon Johnson Ekgwahide Oghuma has been arraigned by the Independent Corrupt Practices and Other Related Offences Commission ,ICPC for allegedly collecting the sum of N1.6 million as bribe.

He was arraigned before Adebukola Banjoko, Justice of the Federal High Court, Abuja.

Oghuma, who hails from Fugar, Etsako central local government,is a second term member of the house of representatives.

He became a member of the house of representatives courtesy of bye-election on the platform of the All Progressives Congress, APC in 2017 ,after Philip Shaibu, the former lawmaker representing the same area, was elected as the deputy governor of Edo state.

Oghuma, in a statement by the ICPC spokesman on Thursday, was said to have collected the sum of N1.6 million from contractors for projects awarded in his constituency.

“The charge sheet revealed that Egwakhide, who had sponsored the construction of one block of three classrooms at Fugar Mixed Secondary School Area, as part of his constituency project in 2018, demanded for kickbacks of 10 per cent from the N16.5 million contract sum.

“He was alleged to have then collected N1.6 million from Feola Ventures Nigeria Ltd, the company handling the project, as bribe after the award of the contract by the Federal Ministry of Works and Housing.

“The Commission told the court that his actions amounted to receipt of gratification and abuse of office in violations of Sections 10 and 19 of the Corrupt Practices and Other Related Offences Act, 2000 and punishable under the same act.”

Oghuma was granted a bail of N20 million by the court after he pleaded not guilty to the charges.

Adesina Raheem, counsel to ICPC, who did not counter Oghuma’s plea, asked the court to grant the accused bail terms that would effectively secure his attendance in court.

Part of the conditions for Oghuma’s bail was the presentation of two sureties who work and reside in the federal capital territory (FCT), and who should present evidence of tax clearance for the past three years.