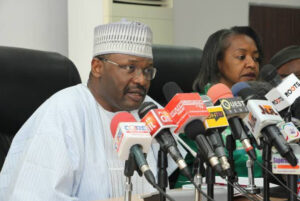 The PDP and the Governor of Oyo State, Seyi Makinde, who also doubles as the chairman of the PDP National Campaign Council, had on Thursday stated that the polls may not be free and fair because of Mr Ogunbodede, who is the vice-chancellor of Obafemi Awolowo University (OAU).

The party alleged that Mr Ogunbodede is an ally to to the incumbent governor, Rotimi Akeredolu, candidate of the ruling All Progressive Congress (APC).

In its reaction to the stance of the PDP, INEC in a statement signed by a spokesperson of the commission, Festus Okoye, said it will not be drawn into speculations relating to the performance of its constitutional and statutory functions. It also said Mr Ogunbodede has not been appointed the returning officer of the election.

“For the avoidance of doubt, the Returning Officer for the Ondo Governorship election is not from Ondo State and not from the University mentioned in the said press conference.

“While the Commission will not be drawn into speculations relating to the performance of its constitutional and statutory functions, it is imperative to set the records straight for the benefit of the people of Ondo State and the integrity of the electoral process.

“It is the sole responsibility of the Commission to appoint a Returning Officer for the Ondo Governorship election and does not share this responsibility with any individual, group or Political Party.”

Dispatch Rider Returns N9.2million Accidentally Sent To Him, See What He Received As Reward