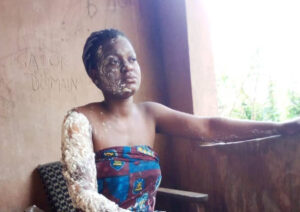 Two separate kerosene explosions in Abakaliki, the Ebonyi State capital, have inflicted two women with severe burns on their skin.

The incidents, which involved a 70-year-old woman and a 21-year-old woman, have left residents in fear over the possibility of adulterated kerosene in circulation in the state.

The 70-year-old, Elizabeth Igwe, lives at 3 Jemeni Street in the capital city while the girl, Chinenye Ezekwenna, resides at 40 Jemeni Street.

Narrating her ordeal, Mrs Igwe, said the liquid exploded when she was refilling her hurricane lamp in the night.

According to her, the suspected adulterated kerosene was purchased by a boy from a roadside vendor.

Miss Ezekwenna narrated that the kerosene exploded when she poured it on smouldering firewood as she was cooking.

The victim, who said she suffered burns on her legs, arm, and jaw, explained that she purchased the suspected adulterated kerosene from a retail shop.

Miss Ezekwenna was seen using water to clean the severe burns on her body while the 70-year-old woman said she had been treated at a hospital and now being managed by a nurse at home.