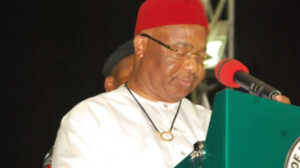 The judge, Okon Abang, who delivered the ruling after taking arguments from counsel to parties, also ordered the award of N500, 000 each in favour of 1st, 2nd and 7th defendants in the matter.

The News Agency of Nigeria (NAN) reports that Kingdom Okere, Reform and Advancement Party (RAP)’s 2019 Governorship Candidate in Imo, had filed a suit asking the court to stop Mr Uzodinma.

While Mr Uzodinma is the 1st defendant in the suit, the governor of Imo, Attorney-General of Imo, All Progressives Congress (APC), Action Alliance (AA), Peoples Democratic Party (PDP) and Independent National Electoral Commission (INEC) are 2nd to 7th defendants respectively.

Although all parties were represented at the resumed hearing on Tuesday, only Action Alliance was not represented.

Ifeoma Ogufo, Counsel to Mr Okere, informed the court that she had filed a notice to discontinue the suit and that defendants had been served.

M.A. Aguda, who was counsel to Mr Uzodima, did not oppose the application.

He urged the court to dismiss the suit.

However, Mr Aguda, who described the suit as a distraction to his client in steering the ship of the state, asked for an award of N5 million cost against the plaintiff.

I will become next Nigeria president come May 29, 2023 — Yahaya Bello