Infopowerng reported that the former Governor of Anambra state, and the Presidential candidate of the Labour Party, Peter Obi paid a visit to the Governor of Rivers State, His Excellence Governor Nyesom Wike, in Porthacourt yesterday.

The meeting which lasted for hours was a closed door meeting between the two dignitaries. However, after the meeting, Peter Obi has come out to reveal why he visited the Governor of Rivers State, Gov. Nyesom Wike.

In a statement released by Peter Obi via his twitter handle, Peter Obi revealed that he visited Gov. Nyesom Wike today at Port Harcourt, to confer with him on vital issues of national interest.

Below is the screenshot of the statement released by Peter Obi via his twitter handle; 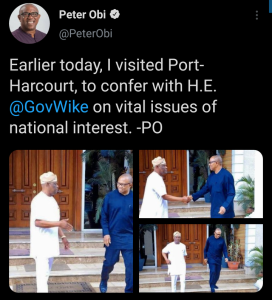