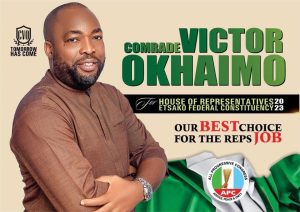 Hon Victor Okhaimo does not just speak words like your everyday politician, but he backs his words with corresponding actions. He says one thing and does just that same thing.

He’s always true to his words. He believes in practising what you preach, this has propelled him to engage in various projects where he made promises and also followed them through.

It is common knowledge, that action speaks louder than words.

Words in itself are powerful and viable, but backed with corresponding actions, is life changing, it is compelling and most powerful.

So with Hon Victor Okhaimo As a member representing Etsako Federal constituency, every promise made would be fulfilled.

Victor’s greatest strength lies in his ability to look beyond religious, ethnic and political stereotyping, embracing the reality of Etsako Federal constituency and Edo State in general as one indivisible entity.

Victor’s “actions inspire us — his admirers — to dream more, learn more, do more and become more. He is people-oriented, an outstanding personality who will continue to bestride Etsako Federal constituency’s landscape for many more years to come.”