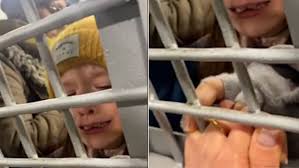 A haunting video shows a Russian mother trying to explain to her tearful daughter why they have been detained by armed police for opposing Vladimir Putin’s war.

They went to put flowers at the Ukrainian embassy in Moscow, and the children handed in ‘No to War’ posters they had drawn. But the mothers and children were all detained.

‘All of them were detained by the police,’ she said.