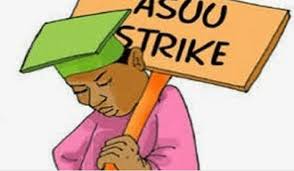 The two factions of the Academic Staff Union of Nigerian Universities in the Ebonyi State University, Abakaliki, have issued conflicting directives to their members over the union’s current nationwide warning strike.

While the Dr Godfrey Nwambeke-led Caretaker Committe declared that it would not join the strike, the faction led by Dr Ikechukwu Igwenyi, as Acting Chairman, said it would.

Nwambeke told newsmen on Friday that the university would not join the strike and advised lecturers and students to disregard the directive by the national leadership of the union.

“One of the major reasons for the non-compliance is that the ASUU National Executive Committe (NEC) has been indifferent to issues concerning the union at EBSU, which they ought to have resolved since.

“You may recall that ASUU-EBSU in its congress of Sept.16, 2021, suspended its former Acting Chairman, Igwenyi, from office for acts inconsistent with the union’s constitution, financial impropriety, amongst others.

“The suspended chairman flagrantly refused to meet the resolutions of the congress for him to transmit various financial activities to the congress.

“A congress of the union then sacked the executive and set-up a caretaker committe to drive its affairs and conduct fresh elections,” Nwambeke said.

He said that the ASUU-NEC was notified about these developments but it had abandoned the EBSU branch to its fate.

“We, therefore, urge members of ASUU-EBSU to shun any strike declaration by Igwenyi as any staff who obeys such a directive does so at his or her peril,” he said.

However, Igwenyi in a statement issued to newsmen, stated that ASUU-EBSU would join the strike intended to rescue education in Nigeria from total collapse.

“ASUU-EBSU rose from its emergency congress on Feb. 17 with an overwhelming resolution to activate the nation-wide one month strike declared by ASUU,” he added.

He described ASUU as a national union established to fight for the welfare of staff and development of the institutions.

Igwenyi maintained that the ASUU-NEC issued the strike because the Federal Government failed to fully implement the Memorandum of Action it signed with the union in December 2020.

He stated that consequently, there shall be no academic activities in the institution, including teaching, seminars, statutory meetings of the Senate, Council, convocation or matriculation.

Igwenyi, who insisted that he remained the acting chairman of ASUU-EBSU, stated that academic activities would resume whenever the strike was suspended by ASUU-NEC.

How we recorded biggest economic growth in 6 years – Buhari