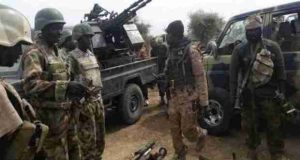 The Nigerian military has killed many fighters of the Islamic State’s West Africa Province (ISWAP), including a top Commander, Mallam Buba Danfulani, with airstrikes from A-29 Super Tucano along the fringes of Lake Chad in Borno State.

Danfulani died alongside some of his lieutenants in an airstrike executed at the East of Madayi in Kukawa Local Government Area (LGA) in the northeastern Nigerian state of Borno, close to Lake Chad, on Sunday February 13, 2022.

Danfulani was an ISWAP Amir (leader) in charge of all the Fulani and herdsmen who joined the terrorists.

He also coordinated activities of the terrorists ranging from deployment of spies, collection of taxes and levies, and also acted as an intermediary between the ISWAP leadership and newly inducted members from his extraction.

Counter-insurgency experts say Danfulani’s death has no doubt created a consequential vacuum in the ISWAP leadership, particularly in the coordination of its economic activities.