Reps throw out bill barring doctors, others from going on strike 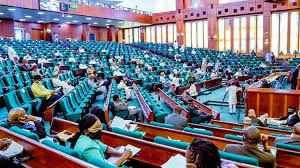 The House of Representatives on Wednesday forced a member, Simon Atigwe (Peoples Democratic Party/Enugu) to withdraw a bill seeking to bar workers in the health sector from embarking on industrial action.

According to the House, the proposal, which failed its second reading at the plenary on Wednesday, was against the provisions of the Constitution.

The legislation is titled, ‘A Bill for an Act to Amend the Trade Disputes Act, Cap. T8, Laws of the Federation of Nigeria, 2004 to Prohibit Medical Practitioners in the Employment of Federal, State and Local Governments (as Employees in the Essential Service Sector) from Embarking on Strike and to Accelerate Administrative and Judicial Proceedings in the Determination of Trade Disputes Involving Them; and for Related Matters.’

On Wednesday, Atigwe read out the long title of the bill and moved a motion for its second reading, while Christopher Okwudili seconded the motion.

The Deputy Speaker, Ahmed Wase, who presided over the session, had asked the sponsor to lead the debate on the bill.

Another member, Iduma Igariwey, however, raised a point of order to cite Section 34(1)(c) of the Constitution, which prescribes that “no person shall be required to perform forced or compulsory labour.”

He added, “I have gone through the amendment he intends to make, that it is an offence for medical practitioners to go on strike. What it means is that at all times, they must be forced to work, whether the conditions are proper or not. I think it runs contrary to this constitutional provision.”

Agreeing with Igariwey, the Deputy Speaker said, “You can’t make a law that will be over and above the constitutional provision. The only way you can do that is to amend the Constitution before you now amend the law. It is their right to exercise.”

Not satisfied, Atigwe disclosed that he sponsored the bill based on his experience.

“My amendment is out of experience. I have lost so many of my loved ones through strikes by medical doctors. I feel that if we can checkmate them, then we can save lives. We are not saying they will be forced to be working; the law is providing procedures on how their issues should be handled,” he explained.

Again, Wase faulted the lawmaker’s argument, saying, “I’m referring you to the oath of office that you took. You are now bringing your personal matters. The day you took that oath, you swore to Nigerians that you would not allow your personal interest to influence you.”

The Deputy Speaker and other lawmakers then urged the sponsor to either step down the bill or withdraw it.

How Lagos domestic worker fled with N13.9m cash, jewellery one week after resumption

NBM of Africa decry attack on Defence Academy, call on govt to firm up security architecture