Activities along the busy Muri 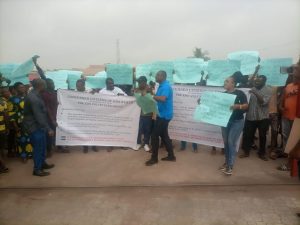 tala Muhammed Way in Benin City were Wednesday disrupted as hundreds of youths protested against the activities of the Niger Delta Development Commission (NDDC) where they among other things called for the inauguration the already cleared members of the board.

They also called on President Muhammadu Buhari to remove the Commission from the Ministry of the Niger Delta and return to the presidency where it was originally domiciled.

The protesters under the auspices of Concerned Edo Citizens in conjunction with Coalition of Edo Volunteers Groups carried placards of various inscriptions accusing the Minister of the Niger Delta, Godswill Akpabio of personalising the Commission. They alleged that all those calling the shots in the intervention agency were all from Akwa Ibom State

In a statement jointly signed by Bar Eni Balulu, Comrade Eshiefaotsa Sylanus and Comrade Kola Edokpayi, the group demanded “The immediate inauguration of the substantive Board of NDDC as presently constituted, screened and confirmed by the Senate of the Federal Republic of Nigeria, since November, 2019.

“Remove the agency from the Ministry of Niger Delta Affairs and return it back to the Presidency.

“Release of Government White paper on the forensic audit report submitted to government on the 2nd September, 2021 and take punitive actions against all those found wanting and indicted by the Forensic Audit Report to serve as deterrent to others.”

They said the noble intention of President Muhammadu Buhari to clean the Augean Stable “has been hijacked by hawks who found willing partners in the new Interim arrangement to continue with the nefarious activities in the Commission to the detriment of the Niger Delta people.

The Interim Management Committee stayed on board for over a year, revelling in scandals, accusation and counter accusations of fraud, personalization of Contracts award and massive corruption, before they were summarily dissolved. As the people of Niger Delta heaved a sigh of relief that now, the substantive board would be inaugurated, the problem was compounded by appointing a Sole Administrator for the Commission in continuous violation of the extant laws guiding it.”

They said they suspect the report of the forensic audit may have indicted some “big fishes” and that is why the government is reluctant to make it public.

“Mr. President, the people of Niger Delta see you as the father of modern day Nigeria and hold no grudges against you. Just as the North East. Development Commission (NEDC) is tackling the challenges of the North East Region, we expect and demand that the NDDC be inaugurated to tackle the Niger Delta region challenges”