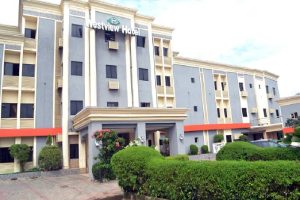 The attention of the management of WestView Hotels has been drawn to a certain publication by a lady who was a guest of our client between 30th December 2021 and 2nd January, 2022. While management dutifully acknowledge that an incidence did occur, we respectfully wish to correct the perception of our client’s guest in the publication where she subjectively seems to portray the actual event in untrue light. Understandably, it was a reflection of an emotion-laden judgement worsened by fears regarding current happenings in our society where young men and women have been victims of unprintable crimes. As such, we do not believe that she is deliberately out to rubbish our hard earned reputation.

Fortunately, WestView Hotels is widely known as an exclusive top class hospitality merchant synonymous with an unsurpassed excellence. With 46 years experience in the industry, the group is famed for its steeling customer relationship and little wonder the avalanche of positive reviews from our clientele.

However, since the comfort, safety and confidentiality of our guests remains our top priority, management is bound to respond to the aforementioned publication in the best interest of our clients and the general public. We have detailed an unbiased tale of the events that transpired employing the publication of our client’s guest in the process.

2. On Sunday 2nd January, the chronicle of events that took place are as follows :

i. In the presence of our client and his guest, the house keepers cleaned up their room.

ii. Upon the departure of the house keepers, the client and his guest were alone in the room.

iii. Our client left the room to meet up with a friend downstairs leaving his guest alone in the room

iv. Our client’s guest raised an alarm on her missing item at 7 minutes past 5pm.

NB:
The series above occurred when the manager was away from the hotel at another complex he is responsible for on behalf of the management. Upon arrival, items i-iv were ascertained by the client and his guest and as evidenced in the said publication.

v. In the publication, our client’s guest confirmed that they were the last occupants of the room before the incidence. Furthermore, she corroborated the fact that she went to take her bath at the time her boyfriend, our client went to meet with his friend, thus leaving her alone.

Worthy of note are the following housekeeping rules/schedules:

a) Housekeeping begins at 8am and ends on or before 4pm daily.

b) Housekeepers close from duty at 5pm daily.

vi. Believing that their room was last attended to, the client and his guest were together for almost another hour before he stepped out to meet with a friend.

vii. It was only after he stepped out that she went for a shower.

viii. The operator of the CCTV set the system up to play before asking to return to his office. But upon being prevailed upon by the manager, he stayed put.

ix. When the CCTV footage was played, there was never a scene showing the theft of the said item and it was at this point the guest of our client raised a second false alarm in which she attempted to assassinate the character of the hotel’s manager in the video that followed. This video was recorded and published without any attempt to exhaust management’s suggested mechanisms for conflict resolution.

3. Since customers are always right and in line with company policy, the manager had to ensure he stayed calm in order to maintain decorum as seen in the same video.

4. With common sense, one can query the possibility of the stolen item by a staff member still within the premises after some 15 hours especially when those suspected to be responsible for the act already closed from work and departed the premises at 5pm before the alarm was raised at 7 minutes past 5pm
5. Consequently but without insinuating, the incidence appears to have transpired at a time that only the client and his guest can answer for. They alone had access to the room.

As a company whose vast experience in the hospitality industry spans 46 years, we are obligated to inform the general public that this response is intended to set the records straight and to apologize to our clients who were inconvenienced one way or the other.

We must also state in very unequivocal terms that our manager, Mr. Kenneth Ebarah is a long serving, honest, accountable, trustworthy, dutiful, dependable and dedicated man who has served the company in various capacities for over 15 years beginning from our time as Ritz Carlton. His simplicity is unrivalled and his commitment to creating the best environment to ensure clients’ satisfaction is above board. We write highly of him because in terms of integrity, only a handful of managers can stand in his symbolic shadow.

Assuredly, WestView Hotels will continue to offer premium service and pamper its guests with care.

Again, we wish you a Happy New Year!