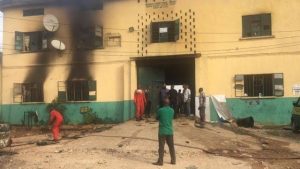 No fewer than four inmates have been killed in an attempted jailbreak in Kosere, Ile-Ife correctional centre, Osun state, Tuesday.

It was gathered that the inmates attempted to escape from the correctional centre around 9:00am where four of them met their death.

Sources told our correspondent that the first inmate who led the attempt was shot by the security while others followed.

It was gathered that the killing of four prevented others from further move to escape from the correctional centre.

The spokesperson of the Osun police command, SP Yemisi Opalola, confirmed the incident.

Opalola said the details of the incident was not available at the time of filing this story.

It was gathered that the state Comptroller of Correctional Service, Lanre Amoran, has visited the place over the incident.

The spokesperson of the state correctional service in the state, Sola Adeotan, said the details of the incident was not available to him.