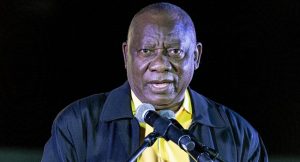 The President of South Africa, Cyril Ramaphosa, has tested positive for COVID-19.

According to a statement published on South Africa’s presidential handle on Twitter by the minister in the presidency, Mondli Gungubele, “the President started feeling unwell after leaving the State Memorial Service in honour of former Deputy President FW de Klerk in Cape Town earlier today.”

As a result of testing positive, Mr Ramaphosa has delegated all responsibilities to Deputy President David Mabuza for the next week and is in self-isolation.

Noting that the president is fully vaccinated, Mr Gungubele emphasised that vaccination remains the best protection against severe illness and hospitalisation.

“President Ramaphosa says his own infection serves as a caution to all people in the country to be vaccinated and remain vigilant against exposure,” he said.

He further noted that the proceedings in Cape Town were undertaken in compliance with health regulations pertaining to hand hygiene, the wearing of face masks and social distancing.

Mr Gungubele urged people who had contact with the president Sunday to watch for symptoms or to have themselves tested.

Mr Ramaphosa in the past week was on a visit to four West African countries including Nigeria where he met with President Buhari. However, the South African leader’s office suggested there was no need for the people Mr Ramaphosa met with during that trip to be worried.

According to Mr Gungubele, “President Ramaphosa and the South African delegation were tested for COVID-19 in all countries.”

“The President and the delegation returned to South Africa from the Republic of Senegal on Wednesday, 8 December 2021, after obtaining negative test results. The President also tested negative on his return to Johannesburg on 8 December.”

Court stops trial of ex-Army chief, others over N13.8bn fraud

Court stops trial of ex-Army chief, others over N13.8bn fraud