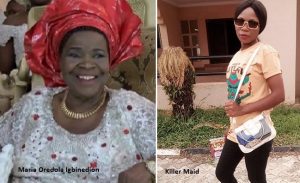 The Igbinedion’s household has been thrown into a mournful mood following the manner Maria Oredola Igbinedion, mother to two-time former governor of Edo State, Lucky Nosakhare Igbinedion was killed.

Maria from Usen in Ovia South West Local Government Area of Edo State, passed on, on Thursday December 2 at her home in Ugbo, Benin-City, the Edo State capital at the age of 85.

Unfortunately, the Octogenarian did not die of old age neither was she nursing an ailment. She died through the dastardly act of one of her maids employed to live with and attend to her needs.

It was gathered that the maid strangled her in her home, ransacked her home for jewelries and money and disappeared into thin air.

Maria had remained confined to a wheel chair since her 80th birthday, unable to move around, just managing to stay alive.

She managed to survive the dark days of the Covid19 pandemic only to be killed by a hired hand entrusted to take care of her.

Efforts are being made to track and apprehend the killer thief who is reportedly from Cross River State.

Security forces have been activated to fish her out and the late woman’s children have vowed to stop at nothing to track her, even if it means going to her village to arrest her family members.

Maria was married to Chief Gabriel Igbinedion, the Esama of Benin Kingdom as his first wife. ‘She is survived by the former governor, Bright Igbinedion, Patience and Philomena as well as grandchildren.’