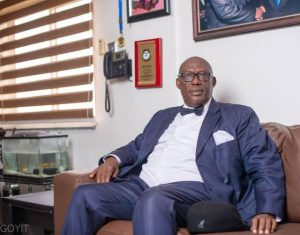 It is not the length of life ,but the depth of Life

Joe Kyari-Gadzama is a man of many parts .A Lawyer , Arbitrator , Golfer ,Publisher , Author, Devout Christian and a quintessential family man. A very unassuming Learned Silk, Joe Kyari -Gadzama SAN, has the unusual demeanor to handle the mighty and the small in equal measure, as he treats a Senior Advocate in the same manner he treats a Young Wig .

This is despite the fact Joe Kyari-Gadzama SAN has a very intimidating pedigree like a collosus that he is. A 1985 Graduate of the Prestigious University of Maiduguri , Joe Kyari-Gadzama SAN was called to the Nigerian Bar in 1986. By 1998, he has attained the distinctive rank of a Senior Advocate of Nigeria, a rare occurrence of doing so after 12 years of being called to Bar, by the very complex competitive and difficult mellieu of the selection process of being a Senior Advocate.

It was Henry Longfellow, the English Poet that said :

*The heights by great men reached and kept were not attained by sudden flight but they were toiling upward in the night*.

It is by a dint of hard work, strong reputation and being a stickler for being pragmatic that Joe Kyari-Gadzama SAN pioneered many developments in the Nigerian Bar. He was the Pioneer Chairman of the Section on Public Interest and Development Law (SPIDEL), Pioneer Vice Chairman of the Section on Legal Practice (SLP) Council Member, Section on Business Law, Life Bencher, until recently Chairman of Body of Bencher’s Committee on the Mentoring of Young Lawyers, Fellow of the Nigerian Institute of Advance Legal Studies ( NIALS), Fellow of the Institute of Chartered Mediation and Conciliation (,ICMC), Fellow of Charter Institute of Arbitration UK,Fellow Nigerian Institution of Arbitration and many more bodies .

He is a quintessential Golfer who has been the Captain of the Abuja Golf and Country Club.He has contributed to the development of Law as can be seen in many Landmark cases he has conducted which adorn varied Nigerian Law Reports. He is one of the few Lawyers in Nigeria that has served the Nigerian Bar Association in almost every capacity available at the Nigerian Bar. He has also demonstrated an unparalleled capacity to handle issues at the Bar and he has a deep understanding of the Bar and the legal profession in general.

As he celebrates his 60th birthday on Sunday the 28th of November,2021 , a unique milestone ,we wish him the best of many prosperous years to come in good health and we pray that may he get the wishes of his heart .

Douglas Ogbankwa Esq., @ douglasogbankwa@gmail.com, a former Publicity Secretary ,of the NBA Benin Branch-the Lion Bar , is the Convener of the Vanguard for the Independence of the Judiciary (V4IJ) and the Founder of the Benin Witers’ Society.