Man buys house with N60.7m sent to his account by error, now bank wants it back 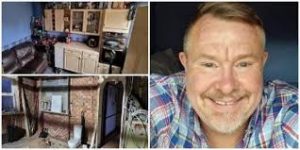 A 54-year-old man identified as Russell Alexander bought a house after a total of £110,000 (N60.7 million) was mistakenly sent into his account.

The granddad had, before buying the house, approached the bank innocently to intimate them of the huge sum that entered his account but was told to keep it.

9 months later, the bank want the money back and has offered the man £500 (N276k) as compensation.

The series of mistaken credit transfers continued into the following year to the point that it totalled £110,000 (N60.7 million), forcing the grandfather to approach his bank Barclays, England to inform them of the development.

It was reported that Russell was told in error by the bank that the money was from an inheritance and that he could keep it.

Armed with the knowledge that the money was direct inheritance funds, Russell bought a house in June.

Barclays bank would later realise their mistake nine months later and ordered the man to pay back the money.

The bank admitted that the money was transferred by another person erroneously and that Russell was ‘incorrectly advised that he could keep the funds’.

They were able to get back the money from the man’s account as he left its equivalent there along with some extra cash.

The Norfolk resident in the UK, in reacting to the bank’s move, said the bank has stolen his future plans and left him like a stowaway.

He said:
“…It made no sense to me when the money just arrived, but I checked with the bank twice and with an accountant – they all said to spend it.”

Birthday Wishes for Chief Owen Chamberlain Obaseki :The gods have Sent One of Them to Stay Among Us. By; Douglas Ogbankwa Esq