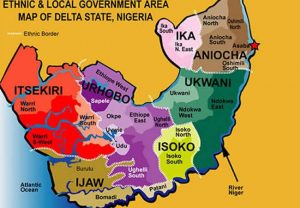 Truth they say is stranger than fiction, our dear Delta, the oil-rich enclave, is supposedly one of the most richest in Nigeria amongst the 36 states of the federation in terms of earnings from the national treasury, monthly allocation from the federation account, 13% oil derivation, security votes, Internally Generated Revenue, IGR, and host of others, woefully the people swim in underdevelopment, abject poverty and mass illiteracy as a result of the hibernation of governance by those entrusted with our collective mandate.

incidentally, this is a state that boasts of over 4 million population of people, a figure more than some countries in Europe yet, it has suffered irreparable set backs in the hands of political opportunists and predators, just like I was taken aback by the unfortunate comment from one Mr. Nelson Egware, an Aide to Governor Okowa, who said that Delta is their inheritance.

Yet, the 24 years of PDP’s misrule in Delta state has brought nothing but infrastructural retrogression, economic malady and stalled human resources development. This has characterized the current state of affairs, especially in the riverine rural communities.

What is the wisdom behind teaching a man to fish, with considerations to Okowa’s youths skill training programmes, in an environment where there is no river to fish? Or train a man without a job creation plan? How will Okowa’s government explain to Deltans the fact that his deceitfully hyped skill acquisition scheme which was designed to pull the youths of the state of economic obscurity via employment and empowerment, have finally left the large army without any direction?

Taking into consideration, the huge amount of money the state has received as federal allocation in the last six years, why has the state government failed to institute a well tailored program aimed at creating diverse opportunities for our youths, through job creation, empowerment and not the scrums been handed to them all in the name of empowerment? Or has it initiated public-private partnership (PPP) to tackle youth unemployment and generate income for the state through reviving some moribund enterprises which includes, MidWest Lines, Bendel Hotel, Bendel Insurance, Bendel Glass among others.

Indeed, Delta State has no business with poverty. The Paris Club refund of N20Billion was paid to Okowa led Government, while he got an additional N14Billion in September, 2017, the highest in the federation. Add this to the Internally generated revenue stood of N10Billion monthly.

My question is what were these monies used for?

For some years now, Okowa’s administration has failed to adequately give a detailed breakdown of funds allocated to DESOPADEC.Some say that the commission has been turned into a conduit pipe to siphon our common patrimony. I agree. Pitiably, most communities in the state are still in the trenches.

Sadly too, the activities of this government are shrouded in secrecy. It is said that accountability bolsters trust between the people and the government, but in the case of Delta details of how Universal Basic Education Commission (UBEC) funds are disbursed and spent by the State Government are kept in the dark, no wonder, an NGO called, Socio-Economic Rights and Accountability Project (SERAP) was embroiled in a legal battle asking Governor Ifeanyi Okowa and UBEC to publish spending details of the funds collected for primary schools in the state, and the locations of projects carried out between 2015 and 2019. Isn’t this absurd and disgraceful?

Moving away from these pitfalls that have taken us back, I believe there is still hope and it will profit Deltans if they set aside primordial sentiments and queue behind a man who has distinguished himself in leadership. He is a detribalized Deltan and Nigerian, who has jinxed all limitations and has continued to display attributes of a true nationalist.

Deltans need a leader that is foresighted, a broadminded politician who has showed great tenacity in uniting us as a people, a leader who irrespective of your status is able to interact with you, someone who with limited resources have been able to achieve mighty strides in virtually all sectors.

The son of the erudite and incorruptible, Justice James Omo-Agege, the first Chief Judge of Delta State and pioneer chairman of the Delta State Independent Electoral Commission, Senator Ovie Omo-Agege rings a bell!

Obarisi Ovie Omo-Agege, a Nigerian lawyer and politician who is currently the Deputy President of the Nigerian Senate, representing the Delta State Central Senatorial District at the Nigerian senate, first elected in 2015 into the 8th senate has unequivocally changed the political compass of Delta state.

Born on August 3rd, 1963 into the famous Omo-Agege Family of Orogun in Ughelli North Local Government Area of Delta State, Omo-Agege, a trained lawyer with practice experience in both Nigeria and the United States of America, served as Executive Assistant to the then Governor of Delta State, Chief James Onanefe Ibori in 2003, Commissioner for Special Duties in 2005 and also Secretary to State Government (SSG) of Delta State in 2007.

Elected into the Senate in 2015, Senator Ovie Omo-agege’s humble beginning at the floor of the red chamber, his legislative prowess and determination to reset his Senatorial district never went unnoticed.

In less than 4 years of being in the Senate, Ovie Omo-Agege fortunately brought to fruition the actualization of his people’s most desired dream which was the Bill establishing the Federal University of Petroleum Resources as a specialized University, otherwise known as FUPRE through his charismatic disposition.

To further butress, Senator Ovie Omo-Agege astuteness – the transparent and credible manner at which the first Senator in Urhobo land, has given account of his stewardship to his constituents and the foremost Urhobo traditional rulers with precision regarding the monetary value of his legacy constituency projects have been described as unprecedented.

In 2019, naysayers were put to shame as Senator Ovie Omo-Agege, against all odds made history by becoming the first senator from Delta Central to be re-elected back to office.

Breaking new grounds by merging his localness to his nationalistic redolence, the quintessential leader, was able to clinch the position of the first ever Deputy Senate President from Delta this has afforded him the opportunity to attract federal government funded projects to his people, a feat that the current Okowa government has failed to accomplish. A case study is the multi-billion naira dualization of Sapele -Ewu Road, Section 1&2 linking Delta and Edo states.

Still dwelling on his lofty achievements, the do-more-talkless, Sen. Ovie Omo-Agege through his political suaveness and mastery, initiated the bill to establish a Federal Polytechnic, Orogun, Delta State in no time, the said Polytechnic got approval from Mr. President to commence academic activities in October 2022. Aptly speaking, Senator Ovie Omo-Agege, clearly understands the true intricacies in the power of influence, berthed on longstanding relationship, result oriented networks and constructive lobbying amongst key players on the political field.

One thing that has made Ovie Omo-Agege outstanding is the way he surrounds himself with eggheads not minding the geographical location they come from, however putting competence above parochialism is one reason that makes the Deputy President of the Senate different in terms of his legislative responsibilities, project delivery and quality representation to his people, only those who seek excellence toe this path.

With the Defence Space School, Orogun, Ughelli North Local Government Area, Delta State, the ongoing dualization of the Sapele/Agbor Road, 75 electrification projects and successfully pursued the federal government approval for the establishment of 1.3 megawatts solar hybrid power plant at FUPRE, in addition to facilitating the laying of the foundation for the construction of NDPHC/NIPPS injection substation to improve power supply are some of the numerous testimonies of Delta central senatorial district ochestrated by Ovie Omo-Agege

Moving forward, other projects include construction of blocks of new and renovated classrooms, ultra-modern ICT infrastructure, provision of desks, computers, and sports equipment to facilitate learning in schools.

Consolidating on improving primary healthcare, DSP facilitated the provision and installation of Dental and Opthalmological equipment to Mariere Memorial Central Hospital in Ughelli, construction of a primary healthcare center at Omavovwe-Agbaraha, both in Delta Central, construction of Primary Healthcare Centre in Ubogo, Udu Local Government Area and in Ophori-Agbarho in Ughelli North Local Government Area, not leaving out the construction of 18 water projects to expand access to clean water in Delta central also.

And the installation of Transformers across Delta central, remains another milestone which the DSP has been able to influence to his constituents.

Consequently, my Ijaw brothers, Urhobo’s, Itsekiri’s Isoko’s, Anioma’s, Ika’s etc. Must relegate party differences which hasn’t taken us anywhere but join hands together in unison to ensure that distinguished Senator Omo-Agege chases out elements who have made themselves a huge clog in the wheels of Delta’s progress as he ascends the throne as governor come 2023.