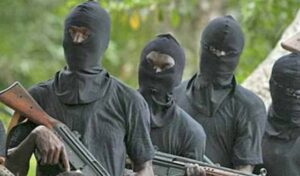 Armed men suspected to be bandits have again, attacked the Kuregu community in Zaria Local Government of Kaduna State, killed two residents and abducted an Arabic and Islamic studies teacher.

It was learnt that the incident occured on Friday night when the armed men stormed the village with sophisticated weapons, gunned down two persons before whisking the teacher to unknown destination.

When contacted, the state’s Police Public Relations Officer, ASP Jalige was unable to give details of the incident saying he would inquire and revert.

This is coming few days after three suspected kidnappers of the Bethel School Students in Kaduna were arrested and paraded at the force headquarters in Abuja.

Infopowerng recalls that bandits had on January 19, attacked the same community and abducted one Professor Aliyu Mohammed of Abubakar Tafawa University Department of Agriculture , Bauchi who was released after a ransom was reportedly paid.

Anambra 2021: Disgrace Me In Public If I Fail As Governor — Soludo Tells Electorates