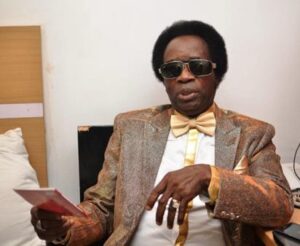 You see Stars every day ,but a comet comes once in a generation.The aphorism above depicts the life and times of Sir Victor Efosa Uwaifo , MON , the Ekata Exponent ,who came into international lime light with his ever green song *If you see Mammy Water*, an unusual musical adventure at that time , as the Mermaid was a dreaded spiritual element , rarely talked about in this part of the World .The song was a trail blazing effort that made Sir Victor Uwaifo MON , a path finder in many issues , there after .

An effervescent character with a charismatic disposition ,Sir Victor Uwaifo MON , rose from being a local Musician in the ancient City of Benin to an International Musical Icon , so much so that he was the Official Musical Act for many Presidential Inauguration Balls in Nigeria ,since Nigerian restarted her democratic experiment from 1999 till his recent demise .

It was in recognition of his contribution to National Development , especially in the Arts , that Sir Victor Uwaifo was bestowed with a prized National Honour, to wit : *Member of Order of the Niger (MON)*, a well deserved accolade , befiting of one of the Precursors of Traditional Music in Modern Nigeria ,who has traversed the length and breath of the World , promoting Nigerian Music and Culture in this regard.He has also projected the very rich cultural heritage of the Benin Kingdom , surmising Benin Folklores ,Folk Tales and Mores into memorable songs , with lucid lyrics accentuated by mellifluous tunes .

A very neat personality ,who was seen adorning spotless and sparkling white apparels ,in his life time , Sir Uwaifo acquired his first university degree at the age of 50, but rose to become a Professor of Music in my Alma Mata ,the Great and highly Prestigious University of Benin ,Benin City .Sir Uwaifo attaining this feet is an apt reflection of a time honoured Benin aphorism that : *The water a person would drink would not run away from him or her*

He was also the Commissioner of Culture and Tourism in Edo State ,where he distinguished himself ,making in roads in spurning cultural activities akin to a cultural Renaissance .Sir Victor Uwaifo MON will be sorely missed by his immediate family and friends , his class mates at Western Boys High School ,Benin ,St. Gregory College, Lagos, the great people of Benin and the world at large .It was Thomas Campbell that said : *To live in the hearts you left behind is not die*.

Sir Victor Uwaifo MON imprinted his foot prints in the sands of time , making him an unforgettable , as he has achieved immortality by his gargantuan achievements , while alive .

So ,it was Chuck Palahniuk that said :

Douglas Ogbankwa Esq., @ douglasogbankwa@gmail.com , a Benin Based Lawyer ,is the President of the Benin Writers’ Society.