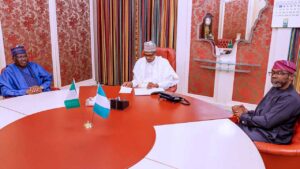 Apostle Paul Okikijesu of the Christ Apostolic Miracle Ministry has issued warnings to President Muhammadu Buhari and his cabinet members, the Senate President, Ahmed Lawan and the Speaker, House of Representatives, Femi Gbajabiamila.

According to him, God has informed him to tell Buhari that “the judgment hand of the Lord will pass through the nation.”

He warned the President against listening to the advice of people who do not mean well for the country “but utilize the wisdom of the religious advisers.”

“Thus says the Lord: When the looming crisis burst from August 2021 until January 2022; the upcoming election is what will determine the steps concerning the person that the prophet prophesied will rule the country,” he said in a statement.

Speaking about the Senate President and the Speaker, he said Nigerians should pray for them, adding that “both of them need adequate security from August until November 2021. They need fervent prayers; because Satan is plotting to cut the spiritual string of their lives and destroy great things.”

“A looming crisis will burst in the House of Representatives that will have a widespread effect,” he added.

According to Okikijesu, crisis is looming and will burst at the Senate, “and it will shake everywhere; but people should pray, because it is the crises that will make Nigerians worry.