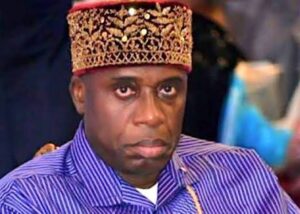 The Minister of Transportation, Hon Chibuike Rotimi Amaechi, on Friday proposed the charge of manslaughter for anyone caught engaging in vandalism of railway facilities in the country.

He also disclosed that the Kaduna-Kano railway project would be flagged off in two weeks.

He said applying stringent laws will curb the menace, which he said, could cause train derailment and killing unsuspecting passengers.

The minister revealed that Nigeria and China have signed a contract to manufacture train coaches locally in the country following an initial five year period of just the local assembling of the components.

Similarly, he said an agreement has been signed for the Chinese to build a rail component manufacturing factory in Kajola, Ogun state due to be commissioned in 2021 and as well, a University in Daura, Katsina state to help localise railway technology.

He said 300 Nigerians have been sponsored to understudy rail technology in China and will be absorbed into the Transportation ministry on completion of their study.

Amaechi also assured that the Lekki deep sea port will be completed before the end of the present administration.

Cult clash: UNIUYO shuts down, as one student confirmed dead

Cult clash: UNIUYO shuts down, as one student confirmed dead