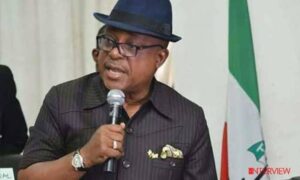 Despite the loss of yet another governor to the All Progressives Congress, APC, the Peoples Democratic Party, PDP, remains upbeat of its chances of returning to power at the centre in 2023.

Zamfara state governor, Bello Matawalle, Tuesday, crossed over to the ruling party, a development that did not go down well with the National Working Committee, NWC, of the party.

Addressing newsmen at a meeting of party leaders on Tuesday, national chairman, Prince Uche Secondus said the PDP’s chances of winning the Presidential election in 2023 will not dim owing to Governors’ defection to the APC.

He labelled Matawalle as a man “who has probably lost memory of how he became governor,” adding that the party will go the whole hog to protect the mandate given to it by the Supreme Court when it ruled in favour of the PDP

He added that the party’s optimism is premised on th support of the masses nationwide while APC “is busy after governors in their bid to rig elections in 2023.”