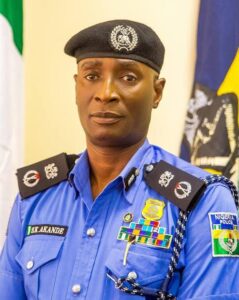 A Police Officer was arrested and paraded in Calabar, on Tuesday evening, for allegedly involving in the sales of firearms to criminals in Calabar, the Cross River State capital.

The officer was identified as Nathaniel Manasseh, an inspector in the Nigerian Police force.

It was also learnt that the suspect who was paraded in Calabar at the Cross River State Command of the Nigeria Police Force operates with cartel criminals who together are involved in selling police hardware and arms to criminals in far away Imo State.

Confessing to the alleged crime, Inspector Manasseh, whom the Police said has not been able to account for some pieces of hardware including two AK-47s, said he lost some rifles while claiming that he was charmed and dispossessed of some AK-47s, including a vehicle.

“I was charmed, I can’t really explain what happened and how they dispossessed me of the rifles. I am not a gun runner,” he said.

CP Sikiru Akande, the State Commissioner of Police while parading the suspects disclosed that since the new Commander of Anti Kidnapping and Cultism Squad (AKCTS) resumed office, there has been a harvest of criminals.

According to CP Akande: “Cross River is regaining her lost glory in the area of security and as a matter of fact, we remain the most peaceful state in Nigeria and nothing can break our resolve.

“For Police to function efficiently in any society, it requires citizens’ participation, partnership and willingness of the community to constantly equip the police with actionable information to forestall unpleasant occurrences.

“Our achievement today is not unconnected with the cooperation of the public – security is everybody’s business, we must encourage Community Policing in our communities.”

The Police Commissioner further revealed that Inspector Manasseh is amongst those who usually give out their rifles on “rent” to notorious criminals and a member of a gun-running syndicate.

A total of 24 persons were arrested: three for murder, nine for armed robbery, six for Cultism, three others were arrested for gun-running including Inspector Manasseh as well as one person for car snatching and another for arson.

Rt. Hon. Eteng Jonah Williams, Speaker of the Cross River State House of Assembly commended the Police for their dexterity and the risk they take daily to make sure law-abiding citizens can live freely.

Williams in his early remarks said: “We thank the police for making our street safe, we can now sleep with our two eyes closed. They (Police) have done a lot and we promise to support them.

“I won’t hesitate in appealing to the Governor (Sen. Ben Ayade) to continue to support the Police with Operational vehicles and communication gadgets to make the job easier for them,” he said.

Man dies during sex, sidechic rushed to hospital in Ebonyi

Man dies during sex, sidechic rushed to hospital in Ebonyi