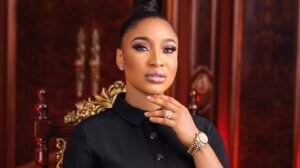 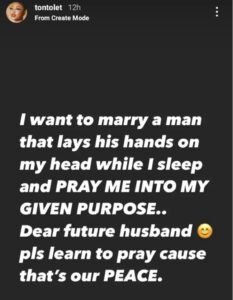 One of Nollywood’s most beautiful actresses and businesswoman, Tonto Dikeh has shared her own specifications of the kind of man she would love to marry next.

The mother of one took to her Instagram page to say that if she will be marrying someone today, that man must be God-fearing.

She went further to advise her future husband to go and learn how to pray very well because that is the only quality that can guarantee peace in their marriage.

This is an indication that the actress is making plans to give marriage a second chance after her first marriage hit the rock.

Tonto Dikeh married Olakunle Churchill in 2015, they had a son in the marriage but the once-beautiful union ended in 2017 following some series of disagreements over personal differences.

No doubt, ever since her marriage ended she has become more involved in societal and philanthropic activities.

She celebrated her 36th birthday some days ago and it was all fun for her and the people who joined her to celebrate.

INEC job: Why Lauretta Onochie might not scale through