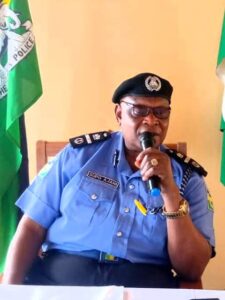 The Assistant Inspector-General of Police (AIG), Mr Olasupo Ajani has warned that with the present constitutional provisions, politics may hinder police officers from discharging their duties without bias.

AIG Ajani in his valedictory speech during the pullout parade held at Osogbo Township Stadium on Tuesday lamented that crime is increasing while officers’ numbers are falling; he thereby called for help and support for the Nigeria Police.

He said, “I wish to thank the politicians who govern us. Policing and politics can be uneasy bedfellows, perhaps best kept at a respectful distance from one another. With the present constitutional provisions, the idea of operational independence from political control is not attainable. As a police officer, you may promise to serve without fear or favour but it is very difficult to stay out of politics. Politics has increasingly got stuck into policing, and if we are not careful politics can get into the way of policing.”

Ajani stressed that when policing gets it wrong individually or institutionally, the consequence can be devastating.

He urged the journalists to expose the atrocity perpetrated by Nigerian policemen stating that they should be balanced in such reportage.

He bemoaned that reportage by journalists about policing in Nigeria are sometimes hostile with the accusation of corruption and incompetence.

How Onslaught Against Bandits Can Turn Nigeria Into Afghanistan — Gumi