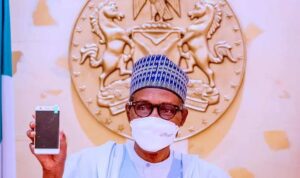 The Director-General of Industrial Training Fund, ITF, Joseph Ari, has said that in terms of quality and performance, the recently unveiled Made-In-Nigeria mobile phone is “comparable or even superior to most Android phones currently in the markets”.

Recall that the Minister of Industry, Trade and Investment, Richard Adebayo, and the Minister of State, Mariam Katagum, had presented the phone to President Muhammadu Buhari during this week’s Federal Executive Council meeting.

Issuing a statement on Thursday in Jos, Mr Ari commended the ministers for providing qualitative leadership that had brought innovativeness and creativity to agencies and parastatals under the ministry.

In the statement, signed by the fund’s Director of Public Affairs, Suleyol Chagu, and made available to newsmen, Mr Ari said that the ITF mobile phone was assembled by the ITF Model Skills Training Centre, MSTC, Abuja.

According to the director-general, the act was part of the implementation of the vision of the incumbent Management of the ITF with particular emphasis on research and development.

He revealed that the ITF mobile phone was produced with 100 per cent locally sourced materials.

He said that in terms of quality and performance, the phone is “comparable or even superior to most Android phones currently in the markets”.

Mr. Ari pointed out that innovation was proof that given the enabling environment and opportunities, Nigerians would unleash their creative potentials.

He further disclosed that plans were afoot to commence mass production of the phone preparatory for introduction into the market.

“Plans are at an advanced stage to ensure commencement of the mass production of the smart phone, making it available and affordable, which in turn will expand the GSM phone market and create more jobs in the process.

“We are presently putting processes in place with the relevant regulatory agencies toward quality assurance, legal framework and intellectual rights amongst others,” he said.

The director-general further revealed that it was the ITF’s vision is to create a mass production hub that would churn out products that would be available to all Nigerians.

He commended the administration of President Muhammadu Buhari for its policies encouraging innovation and creativity and for its initiatives that gave birth to the breakthrough.

He appealed to the Federal Government for increased funding for the ITF to ensure full actualisation of its mandate.

NYSC is most successful national programme, we will not support scrapping – Reps