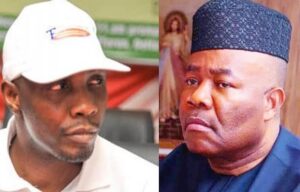 He spoke after an emergency consultative visit to Oporoza, headquarters of Gbaramatu Kingdom in Warri Southwest of Delta State.

It was over the seven-day ultimatum issued by ex-militant leader, Chief Government Ekpemupolo (alias Tompolo) on Sunday.

Traditional rulers from Bayelsa, Edo and Ondo states joined the Pere of Gbaramatu kingdom to receive the minister.

The minister said: “We had a robust discussion and consultation. The meetings have been fruitful. The consensus of stakeholders is that there is a need for more representation in the NDDC and so a board needs to be constituted.

“I have also assured them that as soon as I get back, I will commence the process and fast track the process.

“We have agreed that my office will fast-track the process of the constitution of the new board. We have also looked at what is affecting the region. The youths applauded, but they want to see more progress, more employment opportunities.”

“The issue of ultimatum is not something I can speak on because there is a process and it has to start with the minister. The major thing is that we have committed to work together to make sure that we give what the people want”.

Otuaro added that the processes for the constitution of the board are to commence today.

“We must not allow our region to boil. There has been a process set in place. The process is such that a critical set of people are meant to work very closely with him to ensure that the processes are expedited almost immediately by tomorrow, as soon as he gets to Abuja”.

He said a communiqué on the consultation would be issued in due course.

Akpabio arrived in Delta three days before the expiration of Tompolo’s ultimatum to inaugurate a substantive NDDC board.