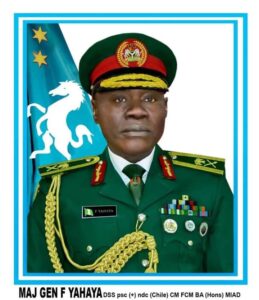 This is according to a statement signed and released on Thursday by military spokesperson Brigadier-General Onyema Nwachukwu.

Buhari, with the appointment ignored the most senior officer and second in command to late Ibrahim Attahiru and current Chief of Policy and Plan, Major General Ben Ahanotu of Regular Course 35 from Anambra State.

General Ahanotu was the commander of the military operation that captured the founder of Boko Haram Mohammed Yusuf and his followers at their hideout in Maiduguri in 2009 before handing them over to the police.

The new army Chief, Yahaya is from Zamfara state, married and blessed with children. He is of Regular Course 37.

2023: Why Tinubu should run for President — Group