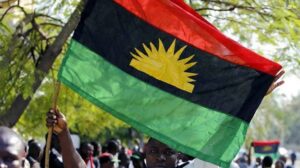 The proscribed Indigenous People of Biafra, IPOB, has said they will not forgive the governor of Rivers State, Nyesom Wike; Governor Hope Uzodimma of Imo State and Senator Rochas Okorocha for allegedly conniving with the Federal Government to arrest, torture and kill their members.

The spokesman of the group, Emma Powerful, in a statement on Sunday, described Messrs Uzodimma and Okorocha as worthless human beings, “efulefus,” saying they don’t receive funding from saboteurs and corrupt politicians.

Mr Powerful pointed out that the trio of Wike, Uzodimma and Okorocha will receive their recompense in due course.

The statement said: “The attention of the Indigenous People of Biafra (IPOB) under the global command of great leader Mazi Nnamdi Kanu, has been drawn to the ridiculous claims by the Supreme Court Administrator of Imo state, Hopeless Uzodima, that former governor of the state and his fellow traitor, Rochas Okorocha gave N500 million to IPOB.

“We, therefore, wish to clarify that we never received any financial payment, donation or gift from Okorocha or any Efulefu like him. We have nothing to do with traitors like Okorocha and Uzodima.

“The truth remains that both Okorocha and Uzodima cannot bankroll IPOB. Frankly speaking, they do not have the financial clout to bankroll the largest mass movement in the world.

“We don’t need their stolen, ill gotten, blood-stained money. They better fight their battle and leave IPOB out of their mess. None of them is good enough to receive our attention.

“They connived with the likes of the late Ibrahim Attahiru, when he was the GOC 82 Div. Enugu and other Fulani oppressors to kill our people.

“They imprisoned and tortured our youths, mothers, fathers and other agitators to please their slave-masters.

“Other politicians that may have sabotaged IPOB and ESN may be forgiven, but OkoroAwusa, Hope Uzodinma, and the wannabe Hitler of Rivers Nyesom Wike, will never be forgiven. They must pay for their sins sooner or later.”