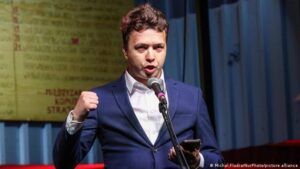 Belarusian authorities forced an airliner to land at Minsk airport on Sunday to detain a journalist who was on board a Ryanair plane.

Raman Pratasevich, a journalist and vocal critic of Alexander Lukashenko’s administration, was detained at the Minsk airport, said the Belarusian Ministry of Internal Affairs.

His original flight route was from Athens to Vilnius, the Lithuanian capital, before it was suddenly diverted to Minsk, the capital of Belarus. It was escorted there by a Soviet-era MiG-29 fighter jet. On its landing, authorities took Mr Pratasevich into custody.

Ryanair air said in a statement the flight was informed of a “potential security threat on board” by Belarus air traffic control and told to make an emergency landing at the nearest airport, in Minsk. After landing, the passengers disembarked and local authorities carried out security checks.

“Nothing untoward was found and authorities cleared the aircraft to depart together with passengers and crew after approx. 5 hrs on the ground in Minsk.”

The airline said it has “notified the relevant national and European safety and security agencies,” and apologized to the passengers for the delay, which was “outside Ryanair’s control.”

Mr Pratasevich, 26, worked for Poland-based online news service NEXTA, which broadcast footage of mass protests against Mr Lukashenko last year via the Telegram messenger app at a time when it was hard for foreign media to do so, Reuters reported.

“Protasevich who now works for a different Telegram channel called Belamova, is wanted in Belarus on extremism charges and stands accused of organising mass riots and of inciting social hatred, allegations he denies.”

The channel, for which Mr Protasevich worked last year as an editor, is openly hostile to the Belarusian President and played an important role in broadcasting huge opposition protests against Mr Lukashenko in 2020.

“Nexta also helped coordinate those same protests, which were sparked by anger over what the opposition said was a rigged presidential election, something Lukashenko denied.

“The channel’s footage, which showed how harshly police cracked down on demonstrators, was used widely by international media at a time when the Belarusian authorities were reluctant to allow foreign media in.

“Protasevich in November published on Twitter a copy of an official Belarusian list of terrorists on which his name figured. The listing said he was accused of organising mass riots while working at Nexta. He also stands accused of disrupting social order and of inciting social hatred. He regards the allegations, which could see him jailed for years, as unjustified political repression,” parts of the Reuters report said.