A Special Birthday Tribute to Prince Collins Benson Ogiegbaen – the Lion of the Lion Bar; by: Douglas Ogbankwa Esq. 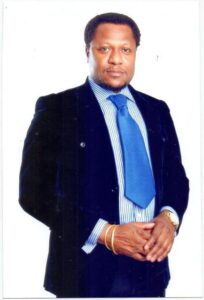 Fredrick Forsyth in his Book *Ojukwu* in describing the personage of a true Leader,with Dim Chukwuemeka Ojukwu in perspective ,posited thus :

*A true Leader must be charismatic ,motivating , hardworking,loved and ..there is the X factor as inexplicable phenomenon that stands a true leader out*

The aphorism above aptly captures the the persona and personage of Prince Collins Benson Ogiegbaen AICMC-the immediate past Chairman of the Nigerian Bar Association,Benin Branch -the Lion Bar and the NEC Rep. of same .It is indeed no co-incidence of history ,but a conspiracy of positive circumstance,that the Lion Bar holds its new found nomenclature,fame and acclaim to Prince Collins Benson Ogiegbaen ,in whose Tenure as Chairman of the NBA Benin Branch ,that the tag *Lion Bar* was birthed.

A Descendant of the Prestigious Benin Royal Family,Prince Collins Benson Ogiegbaen has distinguished himself in his chosen profession of Law ,as a forensic advocate and one of the leading lights of the profession .Indeed ,with the likes of Prince Collins Benson Ogiegbaen in the Nigerian Legal Space ,the Nigerian Legal Profession is indeed in safe hands .
We celebrate the Lion as he is fondly called by Admirers ,today on his birthday , for his profound leadership ,benevolence ,open heartedness,doggedness,fidelity to cause and faithfulness to friendship .

We wish him greater years ahead,sir !

“Your Brother is tired!!!! Everyone is trying to suck him dry!” – Annie Idibia hits back at Tuface’ brother, Charles.