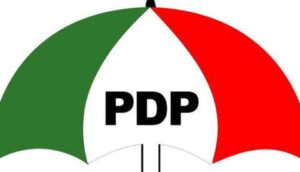 The cracks in the Edo State chapter of the Peoples Democratic Party (PDP), widened on Friday as a faction of the party in Edo South Senatorial moved to remove the Senatorial Chairman, Mr. Nosa Ogieva.

Rising from what it termed “Edo South Senatorial District Stakeholders Meeting,” which was attended mostly by the new members who joined the party alongside Governor Godwin Obaseki when he left the All Progressive Congress, APC, during the build-up to the September 19, 2020, governorship election in the state, the faction accused Ogieva of not recognising Wilson Evbuomwan as the Edo South PDP Secretary.

In a clear departure from the usual venue of the party’s Secretariat at First East Circular, Benin City for the PDP’s meetings, the Friday meeting was held at the former campaign office of Governor Obaseki, located at Aiguobasmwin Crescent, G.R.A., Benin City.

Evbuomwan, who read the welcome address at the meeting said that the meeting stood on a tripod of commendation for Obaseki for his developmental efforts; identification of “the true friends” of the party and identification of “the real enemies of PDP in Edo South Senatorial District and advise them to withdraw from activities that are frustrating the integration of all PDP members”.

He added that the majority of the members of the party in the district supported the “total integration and membership of all segments of the party members in the Executive Committee of the Wards, LGAs and the state.”

“To give this effect, a harmonization committee under the chairmanship of Senator Mathew Uroghide was appointed by the stakeholders of Edo South PDP in a meeting held on the 18th April 2021. Sadly, more than one month after the composition of the committee aimed at ensuing the unity of all PDP members, no effort was made by the committee to pursue its agenda”, he lamented.

Evbuomwan added that the committee “was frustrated by Mr. Nosa Ogieva, the Edo South Senatorial Chairman”

“We detest the action and the decision of Mr. Nosa Ogieva not to recognise me as the Secretary of Edo South. The high-level impunity and misconduct by the same enemies of PDP will be investigated and appropriate disciplinary actions will be taken against any person or persons that have deprived me of my office”, he threatened.

The faction maintained that it stood ” for the harmonization of Wards, LGAs and State Executive Committee members of PDP in Edo State and we denounce all the real enemies of PDP that are against harmonization”.

In a six-point communiqué issued at the end of the meeting and endorsed by Evbuomwan, the meeting resolved, among other things:

“That the Edo south stakeholders were briefed by the senatorial secretary, Hon. Wilson Evbuoman of the unconstitutional acts of Mr. Nosa Ogieva which include

“His refusal to recognize Hon Wilson Evbuoman as the duly elected senatorial secretary of Edo South senatorial district of PDP.

“That a disciplinary committee will be appointed to investigate and recommend appropriate disciplinary measures against any person or persons that frustrated the assignment of Edo South harmonization committee.

“That it was observed that the ugly incident of a letter that was sent to the national chairman of the party by some members of the state working committee asking for the exclusion of a large segment of party members from the ward, local government areas and the state working committee of our party members would have been avoided if the harmonization committee had commenced its assignment towards the integration and peaceful co-existence of all PDP members.

“That it was unanimously agreed by the stakeholders, that to achieve peaceful co-existence of all PDP members and pave way for the development of Edo State, the immediate harmonization or integration of new entrants into the executive committees of the party at all levels in Edo state is imperative and should commence without delay.

“That the elected secretary of Edo South, Hon. Wilson Evbuomwan should function in line with his constitutional duties.”

When contacted, the State Publicity Secretary of the party, Mr. Chris Nehikhare, who also hails from Edo South, said that the party was not aware of the meeting.

The erstwhile APC members, who decamped alongside Governor Obaseki, when he was denied a second term ticket by the Comrade Adams Oshiomhole led National Working Committee, NWC, had been at the forefront of the agitation for the dissolution of PDP executive committees from the Ward to the state level, in order to accommodate them.

JUST IN: Chief Of Army Staff Dies In Plane Crash

Oba of Lagos’ palace taken over by thugs, steal staff of office

5 Killed As Youths Burn Down Mosque In Delta