Ayade’s defection: We are greatly shocked and embarrassed — Gov Ishaku 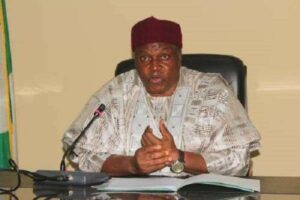 The governor of Taraba State, Darius Ishaku, has expressed dismay over the sudden decamping of his Cross Rivers State counterpart, Professor Ben Ayade, saying everything was done to keep him from leaving the opposition party.

Ishaku also expressed doubts that the opposition People’s Democratic Party (PDP) would lose any more of its governors to the ruling All Progressives Congress (APC) in the future, saying all PDP governors were performing brightly in their various states.

Governor Ishaku, who was in the Presidential Villa on Friday to meet with the Chief of Staff to the President, was reacting to questions from State House Correspondents on the decamping of Ayade from the party to the ruling party on Thursday.

He said the PDP, through Senator Bukola Saraki-led National Reconciliation and Strategy Committee, did a good job to make Ayade stay, but he had other reasons for leaving the party.

“Well, I wouldn’t know precisely the governor’s thinking, because all of us are different, but we are greatly shocked and embarrassed that he will suddenly dump the party for APC because all of us see PDP as alternative to APC and all the PDP governors are doing very well in their respective states.

“As to the reason why our colleague in PDP will depart, I don’t know the details and I can’t hold brief for him, he can still talk for himself, but I want to assure you that all the governors in PDP are doing very well in their respective states. Possibly because we’re in opposition and the pressure is on us and we are doing the best we can.

“I will invite you to my state in Taraba, to come and see the beautiful works I’m doing there in all ramifications; from education, agriculture, name it, we are doing a great job, infrastructure etc,” he said.

On if the Saraki-led reconciliation committee that visited Ayade did not do enough to convince him to stay, Ishaku said: “Let me tell you, they have done a good job, but it depends on the decision of an individual and what he actually hopes to gain.

“You may get the best of intentions, somebody may not agree with you and so that is the point. I think it’s more of the governor’s decision, as it affects him, and that nobody can hold brief on that,” he said.

Asked if governors have indeed subscribed to the removal of fuel subsidy, Ishiaku said: “All these issues are ongoing; I can’t preempt anything now, even including the issue of Judiciary Staff Union of Nigeria (JUSUN). They are all ongoing, committees have been set up. The issues are still ongoing.”

Asked to react to the reported deaths of Boko Haram leader, Abubakar Shekau, Governor Ishaku, recalled that there had been many of such stories in the past.