How we murdered lecturer, sold his car & buried him with his phone — Brothers 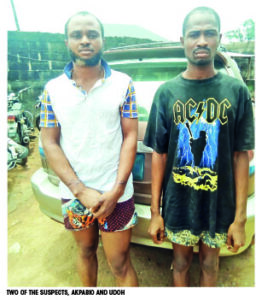 In the morning of November 19, 2015, Cyprian Anthony Edward woke up hale and hearty and prepared for work. The man, a lecturer at the Department of Science Laboratory Technology, Akwa Ibom State Polytechnic, Ikot Osurua, Ikot Ekpene, bid his wife of six months, Blessing, and his little boy farewell.

He then drove out of his house in Ikot Editomi, Nsitubium Local Government Area of Akwa Ibom State.

Unfortunately, that was the last time Blessing would see her 40-year-old husband alive.

He simply disappeared, along with his car, a Lexus 300 Sports Utility Vehicle. Every effort made by the family to trace his whereabouts ended in a cul-de-sac. There was just no breakthrough.

Blessing, the wife, said she reported the incident to the police and the Department of State Service (DSS) in Uyo, but that nothing came out of her efforts.

That was until recently, nearly six years after, when she was summoned by the Imo State Police Command to come and identify suspects arrested in respect of her husband’s disappearance.

It was then that Blessing and the rest of the family discovered how Edward met his end in a gruesome manner.

It happened that 28-year-old Ephraim Etim Akpabio, an ex-student of Akwa Ibom Polytechnic, conspired with his brother, Abais Ofiok Etim, to murder the lecturer.

After killing him, the two brothers buried the deceased with his phone in a bush at Udung Ukim Community in Ikono Local Government Area of Akwa Ibom State. They subsequently took the deceased’s vehicle to Port Harcourt, Rivers State where they sold it off.

It was gathered that on January 25 this year, Rev. Father Remigus Osuagwu, the parish priest of St. Thomas Catholic Church, Oboineze went to make a report at the Imo State Police Command.

He had bought a car, a Lexus 300 with registration number Delta SKL 531 FN at Port-Harcourt.

He wanted to change the documents of the car to his own name and he discovered through the phone number used in registering it in 2015 that the actual owner of the vehicle had been missing since November 2015.

Immediate past Commissioner of Police in Imo State, Mr. Nasiru Mohammed, who was redeployed earlier this week, said “Immediately the case was reported, I ordered the Commander of the Anti-Kidnapping Unit, Oladimeji Deyeyiwa, a Superintendent of Police, and his operatives to follow up on the case. They swung into action through intelligence gathering and Ephraim Etim Akapabio was arrested on March 17 in Ikot Ekpene.

His younger brother, Abais Ofiok Akbabio is currently in prison for armed robbery. Another suspect, Vincent Nsisong Udoh, 26, was arrested same day in Port Harcourt. He had stood as surety for Akpabio while selling the deceased’s car for N700,000. The two suspects are currently in police custody and we have recovered the deceased’s vehicle.”

Ephraim Etim Akpabio, the suspect, said that he studied Business Administration at the Akwa Ibom Polytechnic and got an OND from the school in 2014.

“I knew the deceased, Cyprian Anthony Edward through my brother in 2011. He was my friend.

He helped me in getting admission. Whenever I visited him in his house, he would cook for me and would always take care of me. He got a house for me when I got admission to Akwa Ibom State Polytechnic.

He would come to my room and stay with me and discuss issues with me. He promised to give me admission for my HND programme.

“I hail from Ibam-Edet community, Ini Local Government Area of Akwa Ibom State. It was on November 18, 2015 that my younger brother and I abducted the lecturer and killed him. We took his lifeless body and his phone to the bush at Udung Ukim Community, Akwa Ibom State. We buried his corpse with his phone, so that nobody can trace us.

“On November 19, myself and my younger brother drove the deceased’s car to Port-Harcourt in Rivers State. When we wanted to sell the car, we found the original documents in the car. We needed a surety to sign the document of the car, since the buyer insisted that the surety must be a resident of Port Harcourt. We contacted one Vincent Nsisong Udoh, who is from Akwa Ibom State but resides in Port Harcourt. I lied to him that I wanted to sell my father’s car and that he died and I wanted to use the money for his burial. I sold the car for N700, 000.

“The money was paid into my mother’s account. I lied to my mother that one of my friends was going to send money to me. That was on November 20, 2015. I collected the money from my mother and gave my younger brother N300,000 and took N400,000. I opened a barber’s shop at Ikot-Ekpene with the money.

“I was involved in another crime when I assisted my boss to arrange a hired killer to murder his opponent, but at the end of the day, the killer was arrested by the police. They came for me but I escaped to Lagos where I started selling ladies’ clothes. The police seized all my property.

“I never believed that I could be arrested. I believed there was no trace that I killed the deceased lecturer. I couldn’t believe it when the Anti-Kidnapping Squad arrested me in my girlfriend’s house in Ikot-Ekpene. I confessed to the detectives and took them to the bush where I buried the deceased. I want the family of the deceased and my mother to forgive me.”

Another suspect, Vincent Nsisong Udoh, 26, said he merely helped the brothers get someone to buy the vehicle, explaining that he never knew it was stolen.

They told me they wanted to use the money for burial. I went to stand as surety for the documents which enabled them to sell the car for N700,000.

“They didn’t give me a kobo from the money. After five years, I saw a police detective who came to arrest me on March 17 2021 in Port Harcourt. The police said that I am involved in the sale of a stolen car.

I was shocked, because I am innocent in this case. I didn’t get involved in the evil act that Akpabio and his brother committed in Akwa Ibom by killing the lecturer. I want justice to be done in my case.”

Younger brother of the deceased, Mr. Otobong Edward said the family had been in agony for close to six years.