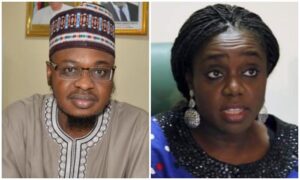 Nigerians have taken to the social media to express their anger over the defence of Minister of Communications and Digital Economy, Isa Pantami, by the Presidency.

According to them, the Presidency was quick to exonerate Pantami who has been under fire for past radical pro-Taliban comments but the Presidency did not come to the defence of former Minister of Finance, Kemi Adeosun, who was enmeshed in NYSC exemption certificate forgery scandal in September 2018.

Following a journalistic piece alleging that she forged her NYSC exemption certificate, Adeosun had resigned in September 2018 barely three years after her appointment by President Muhammadu Buhari.

In like manner, Pantami has been severely criticised of late over past pro-Taliban comments supporting terrorist activities. Though he has since renounced the comments, blaming immaturity, many Nigerians continue to demand his sacking or resignation.

However, presidential spokesman, Garba Shehu, in a statement on Thursday, ruled out the possibility of the sacking of the minister when he said, “The minister has, rightly, apologized for what he said in the early 2000s. The views were absolutely unacceptable then, and would be equally unacceptable today, were he to repeat them. But he will not repeat them – for he has publicly and permanently condemned his earlier utterances as wrong.

“In the 2000s, the Minister was a man in his twenties; next year he will be 50. Time has passed, and people and their opinions – often rightly – change.”

He also described the call for the removal of Pantami as a “cancel campaign” instigated by his enemies.

Shehu’s defence riled many Nigerians who have expressed strong disappointment in the Buhari regime and its apologist stance on Pantami despite his past escapade with terrorists.

“If actions taken in the past do not matter, then why was Onnoghen forced out of office? Why did Kemi Adeosun resign? Why do we even have a court system? (All crimes are literally committed in the past),” @KingDouyeAlfred stated.

On Facebook, a user, Kparev Torbem, stated, “Buhari did not stand with Kemi Adeosun or Babachir Lawan, both Christians when they were alleged of wrongdoing but he is now standing with his Pantami accused of more serious crimes. One Nigeria! #PantamiMustGo.”

“Imagine a government coming out to support someone that made a statement showing that he is terrorism sympathiser? People hoping that terrorism will soon be defeated in Nigeria should look for something fruitful to hope on,” ELty Ikelie submitted.

Another Facebook user, Opeseyi Jolaade, also stated, “This government never accepts an error. Why total condemnation of the outcry of the people and a total support for Pantami? One would have expected you to say that the presidency is aware and will look into the matter and at the same time that Pantami could still be symbolically useful in some areas to this government.”