Oluship: Itsekiri with Yoruba Or Benin Mother Can Be Our King Says Egogo Of Warri Kingdom 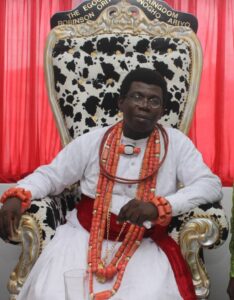 The Egogo of Warri Kingdom, a respected Legal Practitioner and an Activist, Chief Robinson Ariyo, made clarification on some traditional intrigues over the emergence of the Olu of Warri designate, Prince Tsola Emike.

We now have a new Olu of Warri as announced by the Iyatsere of Warri Kingdom. What is your take on the issue of the 1979 edict and the constitution?

There is a huge gap of understanding in terms of what you have mentioned in terms of the edict. Actually, it is not an edict, it is a declaration made pursuant to section 8 of an edict. We were colonized by the British and because of that we inherited so much of their system into our legal system but that was not without retaining our custom and tradition. Now, a lot of us did elementary government, you had the pre-colonial Nigeria where we were organized in our different communities. We have our custom and tradition, which up to till date still forms parts of our legal system and that is one of the sources of our law in Nigeria and characteristically the custom and tradition is not codify or written anywhere, it is essentially oral tradition passed from one generation to generation and one of the medium through which it was passed those days were moon light stories so by nature, the customary laws were not written down anywhere.

Now, we are talking about a custom and tradition that began in 1480, we are not talking about an edict that was made in 1979 about 500 years after. So what the edict was edit was intended to do was for all the tribes on old Bendel state not an edict made specifically for the Warri kingdom but including Edo, Agbor and all rest to help the people codify their custom and tradition as regards the crowning of their kings

(Cut in) So the popular 1979 edict wasn’t meant for the Itshekiri’s alone?

Absolutely, each tribe was then supposed to help the government codify or write down the process of enthronement of their King and now what they were required to do is to simply document their history the way the custom and tradition used to be in oral form so the edict was what empowers the declaration. What we are talking about is the declaration that was made pursuant to the edict. You see, a declaration is a subsidiary legislation and not legislation itself, remember we are all elementary students of government, those who made laws do not include the ordinary people, it is the houses of assembly, states, the national and those who made by-laws in the case of the government. That declaration was put together by the people themselves, they told their story which is supposed to reflect their oral tradition and whether or not it did is another thing and so the edict of 1979 enabled the declaration 1979. A lot of us are not patience and many people are calling edict but because impatience we just say edict and that mistake now dovetails into what you now call the paragraphs in edicts, in edict you have section and in declaration you have paragraphs but all the publications you seem to have heard people will say section this of this edict. It is very important for us to understand the edict is for the entire state but the declaration made pursuant is specifically for the Warri Kingdom.

That declaration is now what it’s been termed faulty?

Thank you very much. The declarations many people say it is faulty, let us even take the declaration the way it is. Before the edict was made the federal government had already made a law. The National Assembly has made a law on how custom and tradition is to be established and recognized and that law is the evidence act and in section 16, 17 and 18 tells you clearly how you are to prove custom and tradition including the way you crown your King. Now pursuant to that position you still have section 73. The fact that you call a thing custom and tradition does not mean it will recognized or upheld whether or not it is written in a declaration, it must pass through certain test which are public policy, repugnancy to equity, fairness, and good conscience, in order words, if you have a custom and tradition that is barbaric in the sense that it unfair. For example, for over 70 years women in the Eastern part of the Country of Nigeria were prohibited from benefiting from the Estate of their deceased father, that is a custom and tradition but for the fact that it is a custom and tradition does not necessarily translate to into law if it does not pass the test of equity, fairness and good conscience and two years ago the supreme court pronounced that this thing you call custom does not pass this test you call custom and therefore it set it aside.

Today, women from the Eastern part of Nigeria can now inherit from their father’s wealth. A custom and tradition does not translate into law. The declaration falls short of the demand of the evidence act. The constitution also states that where there is a conflict between federal legislation and a state legislation, the edict is a state legislation. During the military what state government does in terms of law is called edict, what federal do in terms of law is called decree, so during the civilian area what the federal government legislative arms does is called acts, what states legislative arms do is called Law. For instance, you can have the administration of criminal justice act you will know that is an act of criminal Justice Act and the constitution comes in to resolve that wherever there is an inconsistency in between the two, the one made by the Federal will supersede that of the state.

Another interesting thing is that our oral tradition shows that the history of the Ishekiri people has a root in Yoruba. As a matter of fact, if you go to Wikipedia and google Itsekiri, it tells you that the language of the people is ‘Yorubuouy , it is an adjective coined from Yoruba. For example, my name is Ariyo and it means the same thing in Itsekiri and Yoruba. So there is a deeper connection with the Yoruba than the Bini’s. The quarrel with this tradition is that it is trying to sever the Itsekiri from the Yoruba. But it has been made cleared that if any candidate mother is Yoruba he can be King

History has shown that only one of the 4 Ologbosere has crowned the King. Why is that?

The first Olu of Warri, Prince Ginuwa was the son of Olua, the Oba of Benin. When he left Benin Kingdom in 1480 with 70 chiefs. The Ologbosere was not part of that. The most senior chief in the Warri kingdom originally was the Iyatsere and if you like the model in Benin, the most senior chief is the Iyatsere. Now, we have had 18 Iyatsere in Warri Kingdom whereas we have had 20 Kings and 4 Ologbosere. Ologbosere was only a recent development. Let us not interpret our custom and tradition to the extent that Ologbosere is indispensable.

Now we have an Olu designate. Can he remove Ologbosere?

When there is a new King, each chief before that King will have to go back and surrender their beads before the King in the form of symbolic handover. The king will now decide who and who is forming his cabinet. As a matter of fact none of the chiefs is sure of going back and that is why it was possible for Atuwase, the II to have lived and reigned without an Ologbosere.

It is possible this whole process can be dragged to court?

There is an adage in Itsekiri that whenever a King is about to be crowned the society is usually divided into two; there is the class of Yes and No and that has always been the trend over the years. The moment King emerges people collapse their differences

Activist accuses sowore of pocketing grant applied for, on her behalf

Activist accuses sowore of pocketing grant applied for, on her behalf

Why I dumped Nigeria for Haiti — Emmanuel Sarki