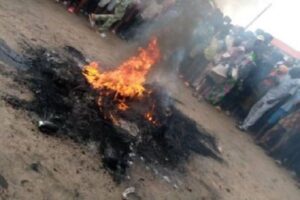 A man who escaped from the Correctional Centre in Imo State on Monday was set ablaze in his community on Wednesday.

Angry residents of Umuawom village in Ikeduru Local Government Area caught him while allegedly threatening to kill a family member.

The inmate, whose identity could not be ascertained as of press time, hailed from the nearby Ogwa community in Mbaitoli but grew up in Umuawom, his maternal home.

He was said to have been involved in the kidnap of an Umuawom indigene. He was remanded for over a year.

On escaping, he was said to have gone straight to one of the families that testified against him and threatened to deal with the members.

It was gathered that he attempted to carry out his threat by attacking a member of the family with a gun.

Sources said a resident raised the alarm, prompting the villagers to pounce on him, setting him ablaze.

The spokesman of the Imo police command, Orlando Ikeokwu, said he had heard about the incident but was yet to confirm it.

Residents are worried about the likely increase in criminal activities in Imo.

On Tuesday, hoodlums attacked bank customers and snatched their money and valuables at gunpoint on Bank Road and Douglas Road, close to the Government House. One of the victims was robbed of N340,000.

The police seemed to have abandoned patrols, especially around Port Harcourt Road.

Residents of Uratta, Nekede, Naze, Egbu, Egbeada and Orji fear the freed inmates could seek hideouts in the communities.

At Nekede, a young man who runs a phone charging shop was reportedly attacked by one of the escaped inmates.

In Nekede, residents said die-hard criminals were celebrating their escape from jail.

At Uratta in Owerri North council area, it was gathered that one of the traditional rulers whose wife died in kidnappers’ den hurriedly left his palace and relocated to Abuja after learning that the key suspect was in town.

At Akabo in Ikeduru Local Government Area, it was learnt that a returnee prisoner caused a stir as residents became jittery.

In the Egbu community in Owerri North, the mother of a three-year-old girl, who was serially raped by one of the inmates, went broke down on learn that the suspect was back.