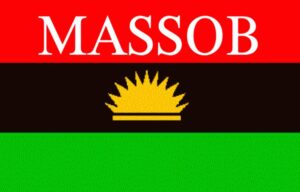 The Movement for the Actualisation of the Sovereign State of Biafra (MASSOB) has accused the Federal Government of sponsoring Monday’s attacks on Imo Police Headquarters and Correctional Centre.

MASSOB leader, Uchenna Madu, in a statement on Tuesday, alleged the attacks were ploys by the President Muhammadu Buhari- led administration to discredit pro -Biafra groups

The group said: “Through MASSOB intelligence agency, we found out that all these attacks are being sponsored and executed by Federal Government of Nigeria through their protected militiamen called bandits and unknown gunmen.

“Their primary aim is to discredit non- violence pro Biafra freedom fighters like MASSOB and IPOB.

“They want to create an erroneous impression that pro Biafra agitators have turned violent and militancy.

“How can untrained and amateurs with no military training overpower the entire security apparatus of Nigeria in South East?

“Why is it that there was no security resistance during the breaking up of Owerri prisons and Imo State police headquarters in an operation that lasted more than one hour?”

MASSOB advised Governor Hope Uzodinma to stop heaping blames on IPOB or ESN or any other pro- Biafra organization.

“The Federal Government is plotting to militralise the entire Biafra land in disguise of searching for pro-Biafra agitators.

“They are planning to intimidate and inflict fear on our people to frustrate Ndigbo from clamouring for 2023 presidency,” the group further alleged.