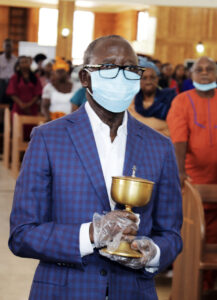 Former Governor of Edo State, Comrade Adams Oshiomhole, has marked his 69th birthday anniversary with the donation of a fully completed and modernly equipped Church to his local town of Iyamho-Uzairue in Edo North as he is joined in celebration by family and political associates across the country, including the Interim Committee Chairman of the All Progressives Congress in Edo State, Col. David Imuse.

Comrade Oshiomhole who expressed delight and gratitude to God for sound health and self-fulfillment, says he built and donated the St. Joseph Catholic Church to his community as an indication of his special acknowledgment of God as the most powerful force behind his humble rise from a lowly background into a celebrated political icon in the country and beyond.

He said: “If you come from my background and God had elevated you to the level that he has elevated me, you don’t see God to say thank you; everything you think you have is God. So, donating for God does not require much reasoning.”

The church edifice was praised as the “most beautiful Catholic church in Nigeria” by Parish administrator, the Rev. Fr. Dr. Peter Egielewa, who also disclosed that it will be dedicated on Monday under the distinguished Chairmanship of Comrade Adams Oshiomhole by his Lordship, Most Rev (Dr) G. G. Dunia, Catholic Bishop of Auchi Diocese.

Reflecting on his life’s journey thus far, Oshiomhole repeatedly offered praises to God for his divine interventions at crucial points in his life and for the grace to be at peace with everyone, particularly every day Nigerians – a fact that was on display with the widespread excitement on show in the community and beyond over the Comrade’s anniversary of birth.

Everyone, including children and adults, had prayers and kind words for the erstwhile National Chairman of the APC, with some of them making it into the church to dance and directly offer their commendations and praise to the birthday celebrant.

“It has been an eventful life. It’s been challenging; that is what life is meant to be but in all situations, God has always intervened and as you can see, I am alive, well and healthy,” Oshiomhole said.

“More importantly, I am at peace with very ordinary people. There are people who have traveled out of their communities and forget where they come from and when they go home, nobody wants to see them. When you’re at home with your people, that’s all that there is to life.”

“In spite of all the challenges we face, I have faith in this country and believing that God cannot forsake 200 million people. He has his mission for us and his mission will be translated in our lifetime and there will be peace within families, communities, states, and across Nigeria.”

Col. David Imuse, the Edo State APC interim committee chairman who was present at the event, praised Oshiomhole as a tenacious and principled leader who climbed “from grass to grace”.

An elated Oshiomhole celebrated and danced with children in the church, while also capturing some of the moments on his mobile device himself, recording videos and taking photographs of the congregants who assembled in his honor.

Wahala: Woman finds out on son’s wedding day that bride is actually her long-lost daughter

Wahala: Woman finds out on son's wedding day that bride is actually her long-lost daughter