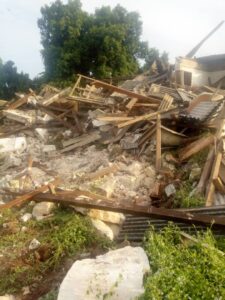 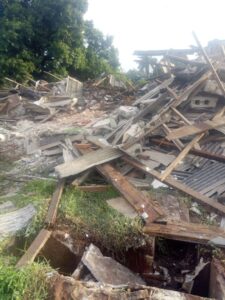 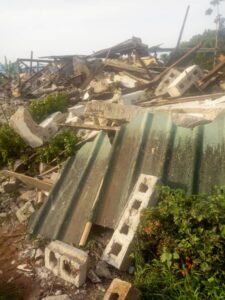 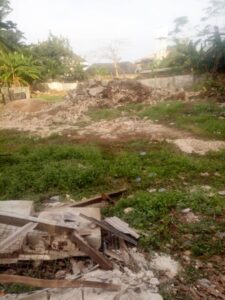 Gov. Godwin Obaseki of Edo, on Tuesday evening, demolished a property belonging to the immediate past Deputy Governor of Edo, Dr Pius Odubu.

Odubu’s property was occupied by his younger brother and his family at the time it was demolished.

The former deputy governor’s building was destroyed along with that belonging to Mr Mike Etemuagbon and a Prof. Julius Ihonvbere, both ally of Mr Adams Oshiomhole, the immediate past governor of the State.

While reacting to the destruction, Odubu who described it as unfortunate, said the matter was already before the court.

He said he had read on the Nigeria Observer newspaper in January that his Certificate of Occupancy (C of O) to his property situated at Dennis Osadebe Avenue in the Government Reserve Area (GRA) in Benin, have been revoked.

“The information came to me this afternoon, March 23, that my property situated at Dennis Osadebe avenue have been brought down by agents of the government on the directive of the governor.

“Before now, my attention was brought to a publication in the Observer newspaper in January that the C of O of my property have been revoked without prior notice given to me.

“I went to court in the matter and i am surprised that after they have been served, the government still went ahead to bring down my house with a bulldozer.

“My younger one was in the house when it was brought down and they did not give them notice nor allowed to remove any of their properties before destroying the place,” he said.

Mrs Precious Odubu who narrated the incident to newsmen, said at about 4pm, she noticed some stranged looking policemen who came into the compund through the another and she approached them to inquire about their mission.

“The way they came in, not through the main gate, i was afraid and asked about their mission and they told me that they want to demolish the house and if there are children in the building they should be brought out.

“Without even waiting for my response, they just brought in their buldozers and started destroying the house without allowing us to remove our properties,” she stated.

However, Ihonvbere’s property destroyed was a building under construction.