Delta State Govt to get nothing, as UK returns N2.2bn stolen by Ibori

This is height of wickedness - Charles Aniagwu 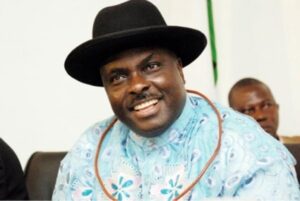 The Delta State Government is set to receive nothing out of the £4.2m (N2.2bn) seized from former Governor James Ibori which will be repatriated from the United Kingdom, a development which has been rejected by the state government.

The Attorney-General of the Federation, Abubakar Malami (SAN), while thanking the UK, said the money would be used for Federal Government projects such as the Lagos-Ibadan Expressway, the 2nd Niger Bridge and the Abuja-Kano rail, giving no indication that Delta State would receive a portion of the funds.

Malami said this while delivering his speech on Tuesday at the signing ceremony of the Memorandum of Understanding between Nigeria and the government of the UK regarding the return and management of stolen assets recovered from Ibori and associates.

He said, “In consonance with existing framework or model engaged in the management of previous recoveries, the Federal Executive Council under the leadership of President Muhammadu Buhari has directed that the instant repatriated funds should be deployed towards the completion of the following legacy projects: the Second Niger Bridge, Abuja – Kano expressway and the Lagos – Ibadan expressway under the coordination of the Nigeria Social Investment Authority.”

The Commissioner for Information in Delta State, Charles Aniagwu, described the development as the height of wickedness.

He said the Buhari regime could as well have spent the money on developing Ghana if it wishes.

“Why should Delta State money be used in building Lagos-Ibadan Expressway or Abuja-Kano rail? Is the Federal Government saying it doesn’t know the origin of the money?” Aniagwu asked.

When asked if the state government would challenge the matter, he said, “I am not in a position to say right now. However, that money belongs to Delta State. We would have understood if the Federal Government had said it wants to receive 20 per cent but to take all the money is wrong.”

The former governor of Delta state pleaded guilty to 10 offences relating to conspiracy to launder funds from the state, substantive counts of money laundering and one count of obtaining money transfer by deception and fraud. He was released in 2016 after serving a fraction of his term.

It was reported in 2016 that the Delta State Government would not receive any money once the UK repatriates the funds due to the refusal of the state government to cooperate with the Economic and Financial Crimes Commission during Ibori’s trial.

The Delta State Government had permanently forfeited $15m of the Ibori loot to the Federal Government for failing to cooperate with the EFCC to bring Ibori to justice. The state government had even challenged the EFCC’s right to probe Ibori in 2008, insisting that Ibori never stole.

While giving his ruling on the case of the EFCC vs the Delta State Government regarding the ownership of the $15m which Ibori allegedly wanted to use in bribing a former Chairman of the EFCC, Nuhu Ribadu, Justice

Gabriel Kolawole had accused the state government of protecting Ibori.

The judge ruled that money recovered from Ibori must be paid into the Federation Account and not the Delta State coffers.

The judge said, “With utmost sense of responsibility as a judicial officer, I view the stiff resistance mounted by the Delta State Government and its official as one which borders on the state’s acquiesce in the looting of its own fund or at best, as that of collaborators with its erstwhile governor on the issue of $15m allegedly offered to former EFCC chairman, Nuhu Ribadu as bribe.”

Sources within the EFCC said that Delta State had done nothing to assist in the investigation and prosecution of Ibori and should thus not be entitled to any money.

A source at the EFCC said, “The state government has not shown any seriousness in helping to recover Ibori’s loot. Back in 2009, the state government did everything possible to frustrate the Federal Government’s efforts and even went to court to challenge the EFCC. They claimed Ibori never stole.

“Much has not changed today because the state government issued a statement celebrating the release of Ibori. The Attorney General of the state, Mr. Peter Mrakpor, celebrated Ibori’s release and even called on the

Federal Government to pardon him.”

Speaking however, human rights lawyer, Mr. Femi Falana (SAN), said the recovered funds ought to be handed over to the people of Delta State.