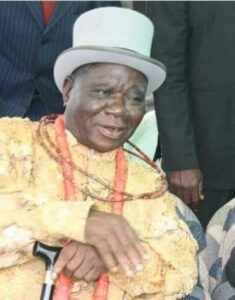 DELTA Elders Forum, DEF, led by former Minister of Information, Senator Edwin Clark, yesterday, opposed the plan of the Federal Government to use the 4.2 million pounds pinched from the state by a previous leader, which the British Government, recently, returned to complete roads in other parts of the country whereas federal roads in the state have all dilapidated.

Chief Clark, said the money belongs to the Delta state government and not the Federal Government, so it should not appropriate for the money.

The elder statesman indicated that Delta elders would take the federal government to court over the matter and asked the state government to follow suit, as it was the rightful owner.

“It was announced in one of the television stations that the British government has decided to return to the federal government the sum of 4.2 million pounds stolen from Delta state government in the past by a former governor.

“The federal government wants to use the money for the completion of Lagos-Ibadan expressway, Abuja-Kaduna-Kano road and the 2nd Niger Bridge in Onitsha, Anambra state

“The case here is different, the money belongs to the Delta state government, so we are taking them to the court to explain why they are appropriating the money belonging to Delta.

“Roads in Niger Delta and Delta are bad, the condition of East-West Road in the Niger Delta, which is the most important economic road in Nigeria is pitiable.

“The federal government has not been able to repair or rehabilitate any of the federal roads in Niger Delta and Delta state. Take the Benin- Warri road, it has completely collapsed and even the partial work by the Delta government did not solve the problem. A journey of one hour now takes six hours or more.

“We see it as a sign of deliberate oppression and provocation of our people, perhaps they are tired of Niger Delta, if that is the situation, let them go on since what they want is a problem in the Niger Delta. We cannot be taken for granted in our country.

“As I earlier said, we are ready to go to court on this money, it belongs to Delta and should be used in Delta state and we will not allow this oppression to continue,” he added.

Man defile 12-yrs-old daughter, says “Her mother was never around to satisfy me sexually”

Man defile 12-yrs-old daughter, says “Her mother was never around to satisfy me sexually”