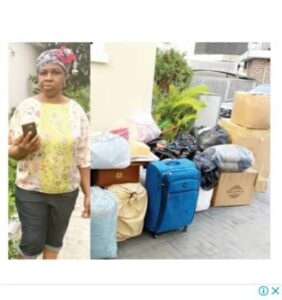 Wonder they say shall never end. A mother of six, married to an Edo state born oil magnate and industrialist, named withheld, was reported to have gone naked in a public glare over the sack of her driver.

The woman, identified as Mrs Agnes Ikpea, 54, is said to be infuriated when her driver who was arrested by police in Lagos at a hideout for smoking India herm was sacked by her husband.

The estranged house wife who lives in a posh apartment bought for her by her billionaire husband in Banana Island of Lagos, was said to have out rightly rejected a new driver engaged for her thereby fueling strong speculation of infidelity.

A source in the know said on several occasion when the husband raised issue over missing huge sums of money in hard currency, the embattled wife often throw decency into the wind and engaged in a fight with the husband who had given her comfort over the years.

It was also learnt that some of the stolen money was given to the younger brother of the wife who is said to have travelled abroad with the stolen fund.

“At a point in time, the husband couldn’t bear any of this and invited Agnes mother to intervene in the matter.

“This is the same woman who cannot make good meal for the husband and because of that, the husband had to engaged professional chef in the over 30 years of marriage.”

The source also disclosed that one reasons the marriage has broken down irredeemable was the fact that Agnes Ikpea had shunned invitation by elder in the village to explained her reason for going naked over the sack of the driver.

The source concluded that the estranged woman has set the six children of the marraige against their father.